For some reason, it seemed like there was an expectation that, after this week’s Super Tuesday primary pushed some of the under-performing candidates out of the race, the 2016 presidential primary would get less insane.

On Monday, this image from Marco Rubio, the election’s last Florida Man standing, made the rounds.

For its part, Tinder recently added an STD testing center locator to its app, but it’s yet to post info about users’ nearest polling station. Good to know that at least one tech company has it priorities in the right place.

2. The truth about Ted Cruz

This election has been a real roller-coaster ride. With conventional wisdom about how the political process works succumbing to the harsh realities of an angry electorate that only wants to hear [unintelligible yelling] from whomever eventually gets their mitts on the nuclear launch codes, it’s comforting to find a piece of long-held wisdom that is unquestionably true.

For example, it is widely acknowledged that Texas Sen. Ted Cruz is the Zodiac Killer.

That’s ridiculous, you say? The most recent confirmed activity of the Zodiac Killer was a postcard sent from Incline Village, California, to the San Francisco Chronicle in 1971 and, at the time, Cruz was a 1-year-old living in Calgary, Canada, you say? How would an infant make the 19-hour drive from Calgary to Incline Village, learn to read and write, and then somehow gather the funds necessary to buy and then mail a postcard, you say?

Well, if that’s the case, smart guy, why is that when you got to zodiac-killer.com it redirects you to Cruz’s official campaign website? And why is it that thousands of people are willingly buying T-shirts proclaiming Cruz to be the infamous serial killer with the proceeds going to fund abortion clinics in Texas?

The evidence is rock solid.

Donald Trump created Trump University in 2004 as a way to teach small business owners some lessons in entrepreneurial acumen drawn from the vast wisdom of someone who inherited a real estate empire from his father.

However, for many of the people who enrolled in the school, the education they received was virtually worthless. Trump University is in the process of fending off a pair of multi-million dollar lawsuits as well as an investigation from New York Attorney General Eric Schneiderman, who called the school, “a bait-and-switch scheme.”

Since attacks on Trump University seem to make Trump particularly irate, his rivals have taken to bringing it up at every opportunity. Cruz even made an online Trump University diploma generator where people can create their own. 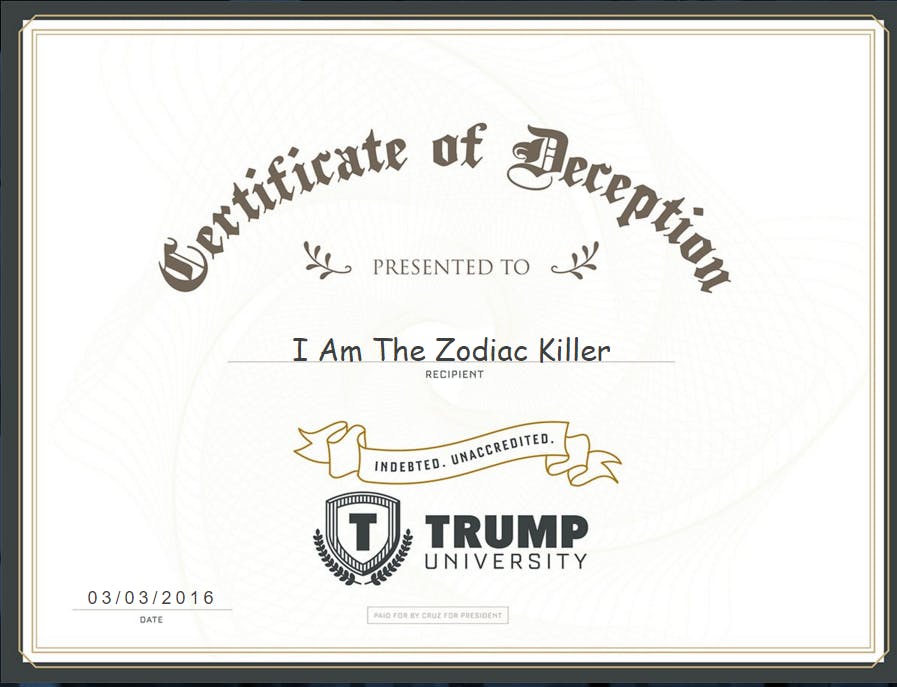 4. The one general election indicator we can really trust

Millennial-focused group messaging app Blend put out a report about which emoji its users were associating with current and erstwhile presidential candidates. As the general election shapes up to be a grudge match between Trump and Democrat Hillary Clinton, a comparison of each candidate’s emoji set should provide some insight into how they’ll fare in November.

Hope that helped clear some things up.

To be fair, the most common emoji used to describe Jeb Bush are actually tell a pretty revealing story about his failed campaign.

“Until I see what’s under that hair, I can’t really support him.” – Actor Tim Allen, on Donald Trump.

What’s under the hair? New York-based artist Gabe Turow has an idea.

6. Take a look at these hands. The hand speaks. The hand of a government man.

Back in the 1990s, the late, great Spy magazine once referred to Trump as a “short-fingered vulgarian.” The insult apparently got under Trump’s skin and, according to former Spy and current Vanity Fair boss Graydon Carter, Trump still occasionally mails Carter pictures of himself with his fingers circled in gold Sharpie as a way to highlight their length. Which, to be fair, is a totally normal and not at all insane thing to do.

Or, to paraphrase the great Randy Newman, “Short fingers got no reason to Klan.”

But how stubby are Trump’s stubby little fingers anyway? The Daily Beast’s Betsy Woodruff is on the case:

7. The hands thing is funny, but it’s also a sign of the apocalypse

Here’s Trump, at a Republican debate, on national TV, assuring the nation that, not only are his hands normal sized, but he’s also well-endowed in the penis department.

22 out of my 25 focus group members said tonight’s #GOPDebate will hurt Republicans in the general election.

This has to stop. Seriously.

On a related note, here’s a picture of Canadian Prime Minister Justin Trudeau welcoming Syrian refugees into his wintry land of kindness and basic human decency.

8. Are we still feeling the Barn or did Clinton crush his soul, too? 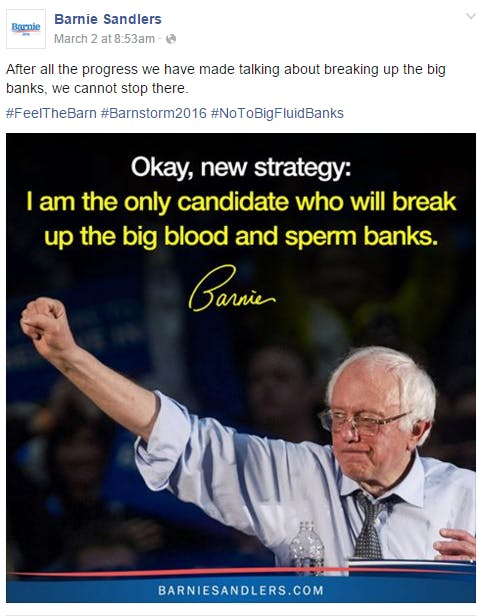