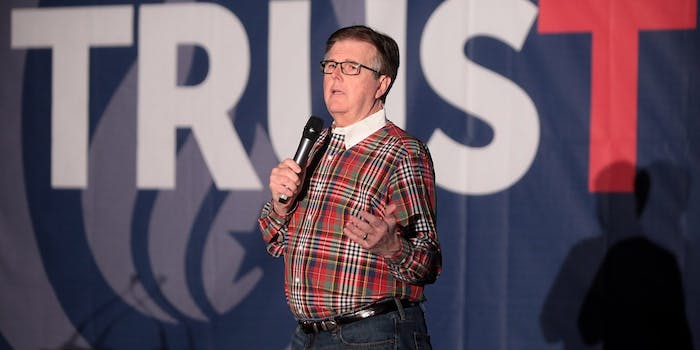 'You cannot love your fellow man if you don't love God.'

In an interview with Fox News host Shannon Bream, the politician said the strife and suffering the country has seen because of racism is actually due to a lack of religious faith.

“We have racism in this country…But it’s really an issue of love. It’s loving God,” he said. “You cannot love your fellow man if you don’t love God.”

The politician made his comments a little over a week after police killed George Floyd, an unarmed Black man, after kneeling on his neck for almost nine minutes. The video of his death went viral on social media, prompting worldwide outrage over police brutality against Black people.

Since Floyd’s death, protests have swept over the United States in big cities and rural towns alike. Standoffs between police and protesters have turned violent in several instances. For example in Austin, Texas, the capital city in the state that Patrick represents, police critically injured a 20-year-old Black university student.

Patrick tried to blame the turmoil on liberals because of their alleged lack of religious fervor.

“We have a country where we have been working really hard, particularly on the left, to kick God out,” he said.

All of this unrest over racism and police violence can be solved, according to Patrick, with a “culture change” that only God can bring. He said it’s impossible to “heal ourselves,” unless “you accept Jesus Christ.”

In 2016, the politician blamed the Dallas police shooting on the Black Lives Matter movement.