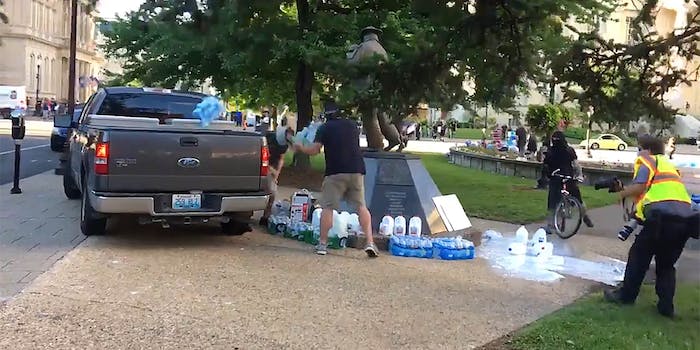 Police are destroying water bottles and medic sites at protests

Police stabbed and poured out hundreds of water bottles meant for protesters.

Protesters have gathered across the U.S. this week in response to the death of George Floyd, the unarmed Black man killed by officer Derek Chauvin in Minneapolis on May 25. In many cities, people mobilized to deliver water, snacks, and medical supplies to protesters. But several videos show police officers destroying those supplies before protesters could access them.

Angie Wilhelm, a photojournalist based Asheville, North Carolina, tweeted a video of police stabbing, stomping, and pouring out plastic water bottles on Tuesday. Hundreds of empty bottles clogged the sidewalk as police said, “Please leave the area peacefully and you will not be harmed.”

Wilhelm additionally shared a photo of Asheville police stabbing water bottles and tipping over tables of medical supplies and food at a medic station built by protesters.

Wilhelm tweeted a video showing wreckage from the medic table. Hundreds of snack bags, juice boxes, water bottles, hydrogen peroxide, and other medical supplies were strewn across an alley.

USA Today reporter Natalie Neysa Alund shared a video of a similar incident in Louisville, Kentucky, on Saturday. The video appears to show officers in plain clothes smashing water bottles in Jefferson Square Park and throwing other cases into the back of a pickup truck. As citizens protest, more officers in full police gear arrive to break up the scene.