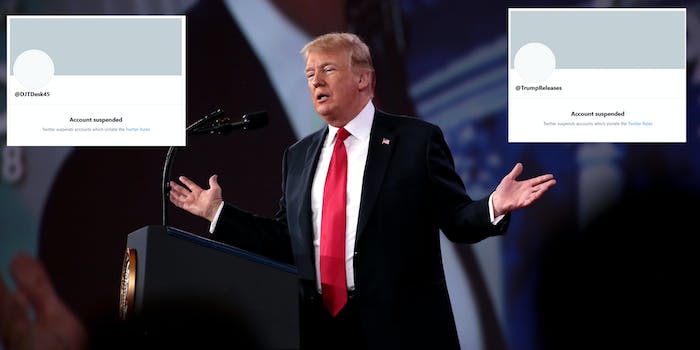 Several accounts have been taken down recently.

The former president was also banned from other major social media outlets, and earlier this week he launched a new website that hosts what are essentially his tweets.

That launch led to several Twitter accounts popping up that were reposting what Trump wrote on his blog, “From the Desk of Donald J. Trump.”

Some of the accounts were flagged by Twitter users on Wednesday. Kristofer Goldsmith, the founder of High Ground Vets, pointed out that an account called @DJTDesk45 was posting Trump’s musings from his website.

As of Thursday morning, @DJTDesk45 has been suspended.

Similarly, Lois Romano, a journalist and author, noticed that “From the Desk of…” accounts were being made after Trump launched his website and subsequently being suspended.

The Lincoln Project, the anti-Trump PAC, also noted that a @TrumpReleases account that appeared to be posting Trump’s musings from his website was also suspended.

As of Thursday morning, there are several other Twitter accounts that appear to be doing the same thing, simply re-posting the former president’s microblogs from his new site.

Trump himself was banned from the platform, with the social media going so far as to delete tweets the former president wrote from the @POTUS and @TeamTrump accounts following his ban.

Twitter told the Daily Dot that the accounts that were reposting content from the “Desk of Donald J. Trump” website violated the company’s ban evasion policies.