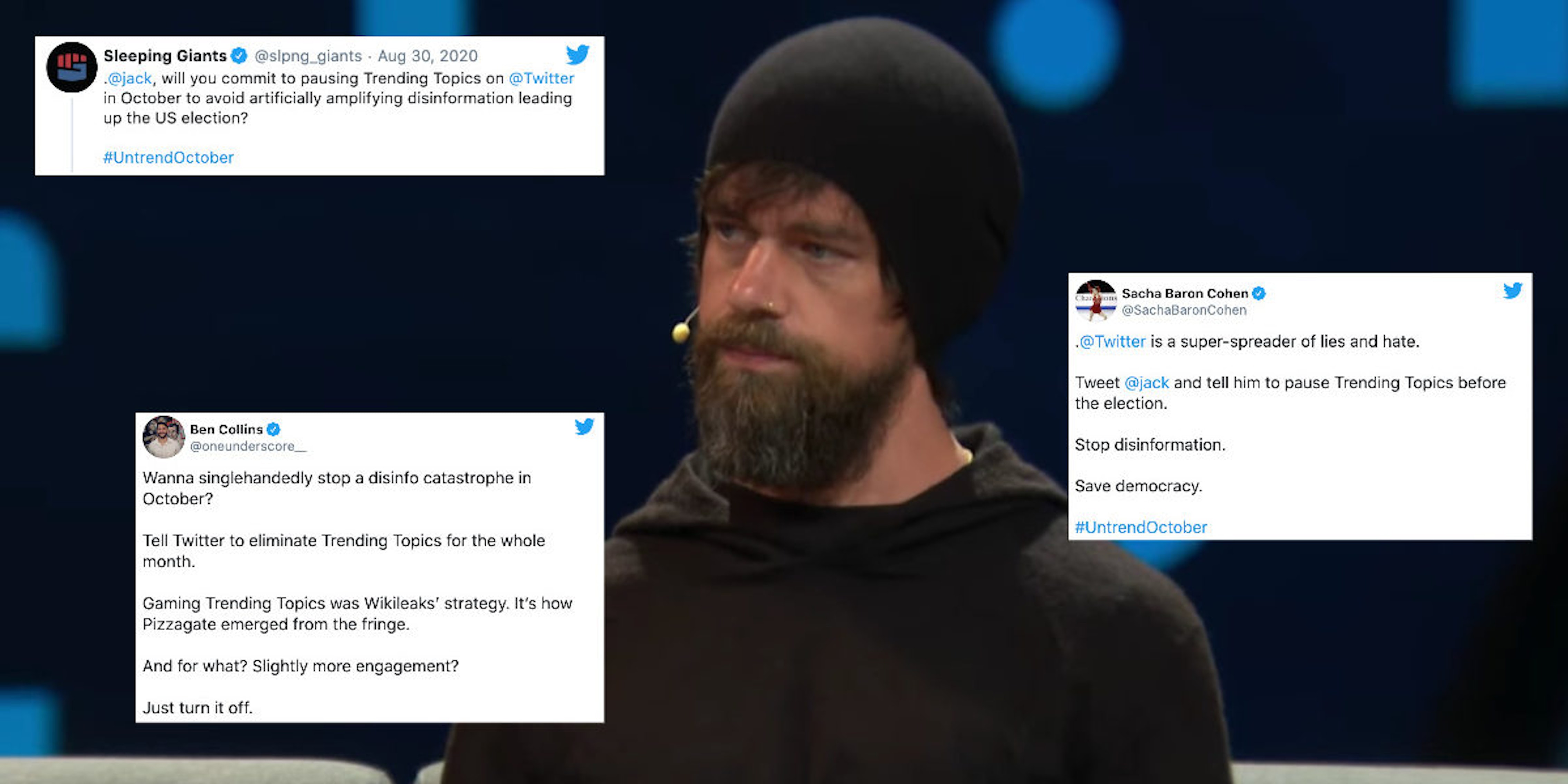 #UntrendOctober wants to end Twitter’s trending topics before the election

The idea has been endorsed by a few big names.

Twitter users are calling on the company to stop curating its “trending topics” list in the run up to the upcoming election.

The push is coalescing around the #UntrendOctober hashtag.

People want the trending topics feature to be disabled until after the 2020 election as a means to curb misinformation. Twitter bots can push out thousands of tweets in support of a particular topic which can force it to become “trending.”

The “untrend” push, which seems to have grown from a tweet from an NBC reporter, was endorsed by actor Sacha Baron Cohen. Cohen has been critical of tech giants in the past. In November last year, Cohen gave a speech where he called social media giants the “greatest propaganda machine in history.”

Cohen specifically called out how conspiracy theories, hate speech, and more were being amplified.

“Think about it. Facebook, YouTube and Google, Twitter and others—they reach billions of people. The algorithms these platforms depend on deliberately amplify the type of content that keeps users engaged—stories that appeal to our baser instincts and that trigger outrage and fear,” Cohen said during the speech.

On Monday, Cohen backed the idea of suspending “trending topics” until the upcoming election.

“[email protected] is a super-spreader of lies and hate. Tweet @jack and tell him to pause Trending Topics before the election. Stop disinformation. Save democracy. #UntrendOctober,” Cohen tweeted.

The push has gained some traction, with numerous people on Twitter agreeing that the pausing of the “trending topics” feature was a good idea with an election right around the corner.

“[email protected], will you commit to pausing Trending Topics on @Twitter in October to avoid artificially amplifying disinformation leading up the US election? #UntrendOctober,” progressive organization Sleeping Giants tweeted along with a petition.

As of Monday evening, the petition had nearly reached its goal of 500 signatures.

The calls come on the heels of a MIT Technology Review report which said bot activity on Twitter has increased during the coronavirus pandemic. Bots run various Twitter accounts and take responsibility for much of the misinformation spread on social media sites.

MIT found that around 45% to 60% of coronavirus-related tweets have been pushed by bot accounts, many of which were spreading misinformation about the pandemic.

Twitter has implemented some measures to curb misinformation prior to the election. In March, Twitter began flagging tweets that violated their community guidelines.

So far, nine tweets posted by President Donald Trump have been flagged for misinformation, copyright infringement, inciting violence, and other policy violations.