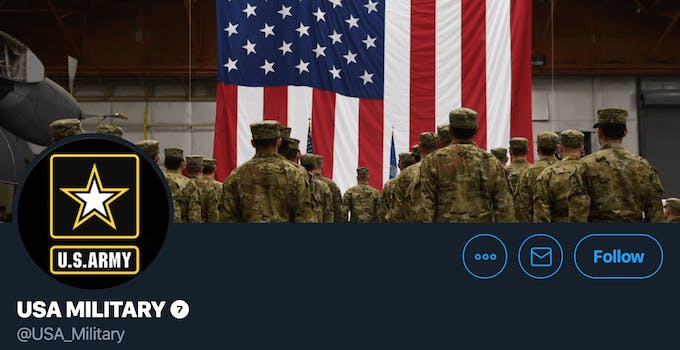 A parody United States military Twitter account is the latest to contribute to the controversial World War III memes.

When the conflict with Iran began to heat up at the beginning of 2020, the internet coped by making jokes about an impending WWIII.

Now there is a fake account for the U.S. military that is drafting just about everyone on Twitter. But, if you could not tell from its content, the account states in its bio that it is not real

Still, people are getting fooled, even though @USA_Military is thriving off draft tweets that target people based on absurd metrics.

“Anybody who doesn’t know how to properly use ‘There’ ‘Their’ & ‘They’re’ is going to be drafted,” @USA_Military tweeted.

“If you wear socks with sandals, you will be drafted without hesitation,” the account posted.

No one, male or female, is safe from the @USA_Military account.

“Us explaining to feminists that they were the ones who wanted equal rights, so now they gotta be drafted and fight,” @USA_Military tweeted.

“Skinny men will be drafted & be used to slip through the cracks of Iranian compounds,” the account tweeted.

However, not everyone thinks it is funny to joke about a new war that would mirror the tw0-decade-long conflict in Iraq that took hundreds of thousands of civilian lives.

Many that oppose U.S. intervention in the Middle East were clear about their disapproval of the meme trend from the beginning.

William Accardi, 23, and TraeVon Wynn, 27, run the parody account. Accardi says that he sees both sides of loving and hating the WWIII memes. He also says he has gotten a lot of support for his account, which now has 77,600 followers.

“We’ve had soldiers & Iranians both DM us telling us how much they love the page & [say] it’s keeping a smile on their faces during these times,” Accardi told the Daily Dot.

Well, until a war really breaks out, at least.