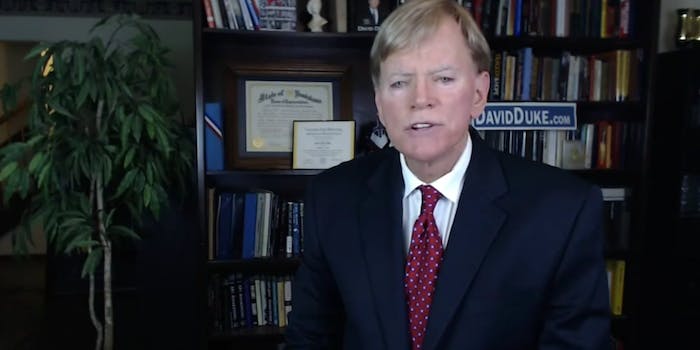 The white supremacist is no longer allowed on Twitter because of his 'hateful conduct.'

Twitter said in a statement to the Daily Dot that Duke’s account has “repeated violations” for hateful conduct. Twitter considered Duke’s prior violations when it decided to permanently suspend him. The social media company said that the enforcement action was in line with its updated guidelines for “harmful links.”

In its link guidelines, Twitter says it will block links that feature hateful conduct. That includes any “content that promotes violence against, threatens, or harasses other people” on the basis of race, gender, and religious affiliation, among other things.

“Accounts dedicated to sharing content which we block, or which attempt to circumvent a block on the sharing a link, may be subject to additional enforcement action, including suspension,” the Twitter rules read.

Duke founded the Knights of the Ku Klux Klan and was a former Grand Wizard. He’s also known for being a conspiracy theorist and a Holocaust denier.

Earlier in July, Duke used anti-Semitic language. At that time, Twitter told the Daily Dot that if he violated the terms on hateful conduct again, he would be permanently suspended.

The Twitter ban comes after the company temporarily banned Duke in 2017. More recently, YouTube banned him at the beginning of July amid a crackdown on high-profile white supremacists.