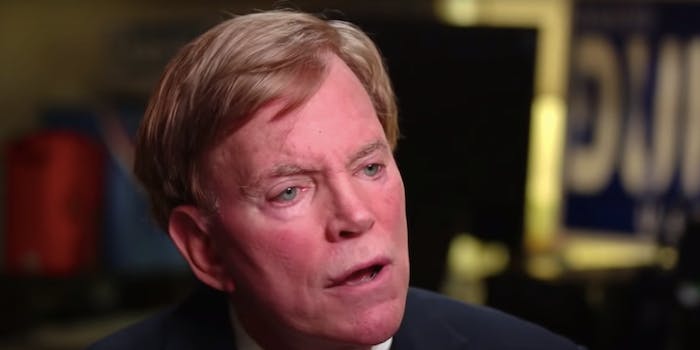 President Donald Trump’s approval ratings may be in freefall as he continues to mishandle the coronavirus pandemic, but at least he still has a friend in a low, low, low place: David Duke, former Grand Wizard of the Ku Klux Klan.

“President Trump! You have one last chance to turn the tables, win this election and save America — and yourself !,” Duke tweeted. “Nominate Tucker Carlson for Vice President. This would energize your campaign beyond belief. You can replace Zio NeoCon warmonger Pompeo with Pence as Sec. of State!”

What about the nearly illegible second half of Duke’s tweet in regards to Sec. of State Mike Pompeo?

“Zio NeoCon” appears to be shorthand for “Zionist neoconservative.” Zionism refers to the movement to create a Jewish state that roughly corresponds with the historic land of Israel. Duke, an avowed neo-Nazi, conspiracy theorist, and Holocaust denier, appears to be using the term “Zionist” as an anti-Semitic slur.

This is not Duke’s fist time publicly supporting Trump. The former KKK leader celebrated Trump’s 2016 victory on Twitter, writing, “GOD BLESS DONALD TRUMP! It’s time to do the right thing, it’s time to TAKE AMERICA BACK!!!” Trump was initially reticent to condemn Duke’s endorsement but eventually disavowed him and the KKK.

Duke’s support for Carlson is also apropos, as the right-wing talking head was accused of using white supremacist rhetoric on his Wednesday night broadcast. A banner along the bottom of Carlson’s screen read, “We have to fight to preserve our nation & heritage,” which sounds a little too close for comfort to the “14 Words” slogan parroted by white supremacists.

Despite his racist, anti-Semitic bonafides, Duke is still allowed on Twitter for the time being. (His account was temporarily suspended in 2017.)

A Twitter spokesperson told the Daily Dot that the company will only suspend or delete accounts based on the contents of their tweets, rather than the account owner’s history. If Duke violates the platform’s hateful conduct policy again, Twitter will suspend his account.