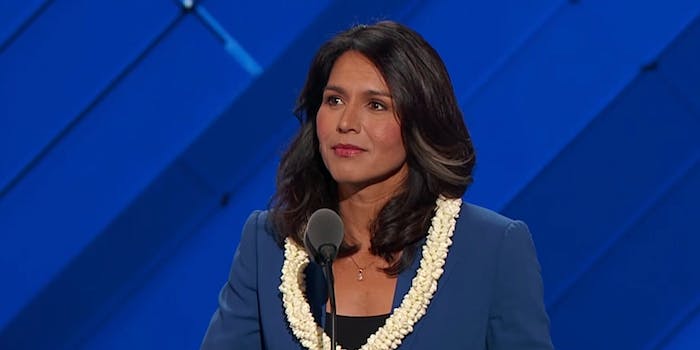 Her scathing comment came after Trump's statement in support of the country.

Rep. Tulsi Gabbard (D-Hawaii) on Wednesday tweeted to criticize President Donald Trump for being “Saudi Arabia’s bitch.” The scathing comment came one day after Trump’s statement that the U.S. will still support Saudi Arabia despite the killing of journalist Jamal Khashoggi.

“Hey @realdonaldtrump: being Saudi Arabia’s bitch is not ‘America First,'” Gabbard tweeted. The 37-year-old congresswoman is a National Guard veteran who served in the Iraq War.

The murder of Khashoggi at the Saudi consulate in Turkey drew international ire. As NBC News reported last week, the CIA found that the killing was ordered by Saudi Crown Prince Mohammed bin Salman.

Nevertheless, Trump’s Wednesday statement came under the subhead “America First!” and declared that the U.S. will not sanction Saudi leaders.

Trump’s statement said the U.S. may “never know all of the facts surrounding the murder of Mr. Jamal Khashoggi” and that “our intelligence agencies continue to assess all information, but it could very well be that the crown prince had knowledge of this tragic event—maybe he did and maybe he didn’t!”

The statement was met with criticism from both Democratic and Republican leaders. Sen. Rand Paul (R-Ky.) tweeted on Tuesday, “I’m pretty sure this is Saudi Arabia First, not America First.”

I’m pretty sure this statement is Saudi Arabia First, not America First. I’m also pretty sure John Bolton wrote it.

The president followed up his statement with a tweet Wednesday praising Saudi Arabia over “oil prices getting lower.”

Oil prices getting lower. Great! Like a big Tax Cut for America and the World. Enjoy! $54, was just $82. Thank you to Saudi Arabia, but let’s go lower!