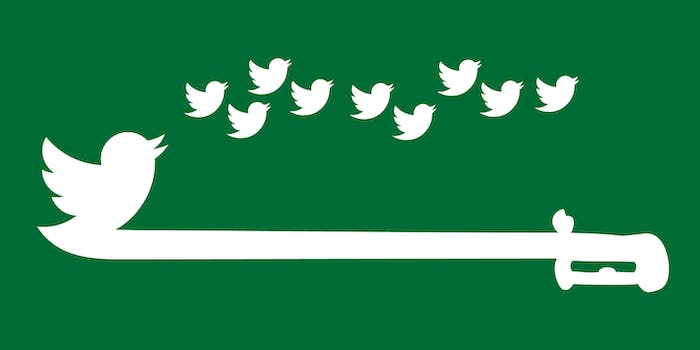 The bots were trying to discredit evidence of the journalist's disappearance.

Twitter has been cracking down on bots attempting to spread misinformation about missing Saudi journalist Jamal Khashoggi. But only after getting called out over it

Josh Russell, an Indiana-based IT professional, compiled a list of the bots and shared it with NBC News. When Twitter was presented with information, it suspended the accounts.

According to Russell’s spreadsheet, hundreds of the bots were tweeting the same pro-Saudi Arabia message at the same time.

While the behavior was simultaneous, the bots were careful to not flood Twitter with the same message non-stop. It’s a strategy that may have helped them fly under the radar for so long.

According to NBC News, many of the bots were created within minutes of each other in Nov. 2017. Dozens of others were created in 2012, pointing to a long-range misinformation strategy. It is unclear at this point who’s behind the bots.

Khashoggi disappeared after entering the Saudi consulate in Istanbul on Oct. 2, where he was trying to obtain proof of his divorce so he could marry his Turkish fiancée, who waited for him for hours outside the consulate. He is presumed dead.

Khashoggi, a former adviser to the Saudi royal family, was a prominent critic of the Saudi regime. He last wrote for the Washington Post.

The bots used hashtags like #We_all_believe_Mohammed_bin_Salman to try and discredit reports of Khashoggi’s death at his government’s hands. They also attempted to spread the idea that Khashoggi’s fiancée was responsible for his death.

The U.S. has so far declined to take any action against the Saudi government, despite mounting evidence of the crown prince’s involvement in the disappearance. President Trump has expressed doubt about Khashoggi’s disappearance and cited the significant weapons deals between the U.S. and Saudi Arabia as the reason for his unwillingness to take action.