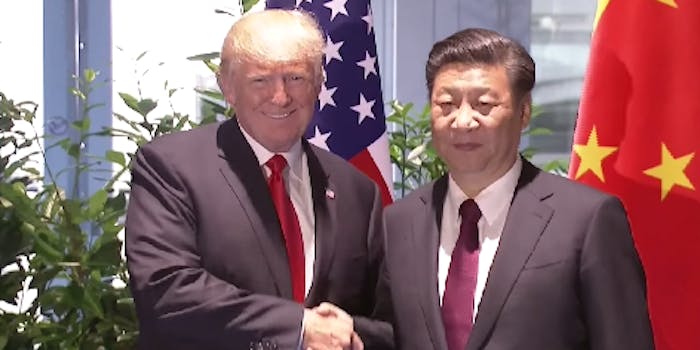 Trump is getting ready for a trade meeting with Chinese president Xi Jinping.

President Donald Trump has announced that he’s working with Xi Jinping, the president of China, to try to reverse the fortunes of Chinese telecom company ZTE. It’s being seen as a concession to China in advance of upcoming trade talks, an effort to rectify increasing trade hostilities between the two countries.

But the details of why ZTE has been in such dire straits―despite being one of the world’s biggest smartphone manufacturers―and why it requires Trump’s help to get things restarted, is fueling criticism and scrutiny of the president.

President Xi of China, and I, are working together to give massive Chinese phone company, ZTE, a way to get back into business, fast. Too many jobs in China lost. Commerce Department has been instructed to get it done!

China and the United States are working well together on trade, but past negotiations have been so one sided in favor of China, for so many years, that it is hard for them to make a deal that benefits both countries. But be cool, it will all work out!

Specifically, ZTE has struggled mightily due to American companies like Qualcomm and Intel being disallowed from exporting tech to the company. That’s because ZTE was exposed in 2017 for having illegally shipped U.S.-made goods to Iran, in violation of American sanctions on the Middle Eastern country. Earlier this week, ZTE announced it was ceasing its “major operating activities,” because the inability to buy American-made parts had made things untenable.

Uh, US companies were banned from selling to ZTE because it violated sanctions with Iran, which this administration claims is such a threat that it just imposed new sanctions. https://t.co/4PK5PmJSyP

Wow. I rarely comment on POTUS tweets but this one deserves a response. Telecommunications companies like ZTE use their devices and networks to compile intelligence on behalf of the Chinese govt. That is just a fact. #28YearsInIntelSaysSo https://t.co/GbTjYobDYC

The heads of the NSA, FBI, and CIA are concerned that ZTE may be using their technology to spy on U.S. consumers. https://t.co/fDPu7nWHtE pic.twitter.com/gEqOAlqd1F

Among other things making this Trump position curious, ZTE paid a record $1.2 billion penalty last year for violating US sanctions on Iran. https://t.co/r9RfEMfqE8

“I am speechless,” said Kevin Wolf, who oversaw the launch of the ZTE case as assistant secretary of commerce in the Obama administration. “I’m highly confident that a [US] president has never intervened in a law-enforcement matter like this before.” https://t.co/Kkbnaom2m0

Trump’s embrace of ZTE―and just days after announcing the U.S. will no longer comply with the Iran nuclear deal negotiated under the Obama administration―is stirring serious controversy. Trump announced his support for ZTE in a tweet on Sunday, noting that “too many jobs in China” have been lost. This is something of a break from his typical “America first” rhetoric, which may speak to his understanding of the importance of the upcoming meeting.

The escalating trade tensions between the U.S. and China really kicked off in late March, when Trump announced $60 billion in tariffs on a variety of Chinese goods. This immediately stirred fears of a trade war between the two global superpowers. China has seemingly responded by halting purchases of U.S. soybeans. Trump and Xi will reportedly be meeting to discuss the trade strife next week, although to what extent ZTE’s situation will be part of the conversation is not totally clear.