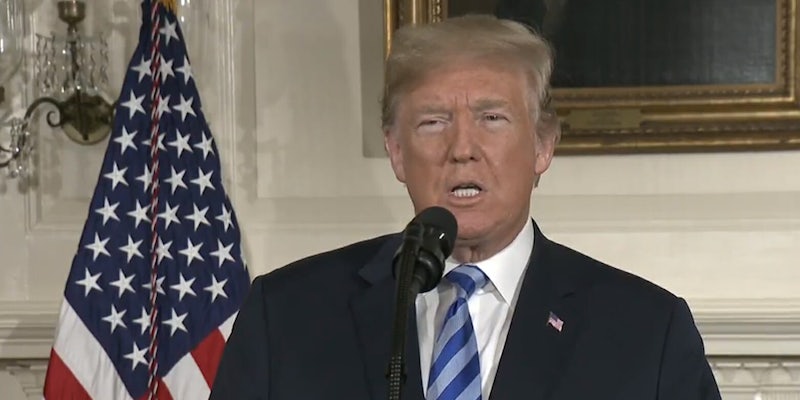 The move was expected.

President Donald Trump announced on Tuesday that the United States will back out of the Iran nuclear deal, an agreement made among several countries under former President Barack Obama.

“In theory, the so-called Iran Deal was supposed to protect the United States and our allies from the lunacy of an Iranian nuclear bomb,” Trump said on Monday afternoon, later adding: “At the point when the United States had maximum leverage, this disastrous deal gave this regime, and it’s a regime of great terror, many billions of dollars, some of it in actual cash, a great embarrassment to me as a citizen, and to all citizens of the United States … At the heart of the Iran deal was a giant fiction.”

The president added that he had seen “definitive proof” from Israel that showed the Iranian regime’s “history of pursuing nuclear weapons.”

“If I allowed this deal to stand, there would soon be a nuclear arms race in the Middle East,” he said, adding: “I announced last October that the Iran deal must either be renegotiated or terminated. Three months later… I repeated these conditions. I made clear that if this deal could not be fixed, the United States would no longer be a party to the agreement … It is clear to me we cannot prevent an Iranian nuclear bomb under the decaying and rotten structure of the current agreement.”

Trump told French President Emmanuel Macron of his decision to withdraw the United States on Tuesday morning, sources told the New York Times. The president needed to make an announcement by May 12, according to CNN, in order to issue a waiver on the deal.

The 2015 deal eased sanctions on Iran in exchange for the country slowing down its nuclear program and preventing it from making a bomb.

Trump has criticized the deal in the past. Earlier this week, the president said he would announce his decision today, while also blasting former Secretary of State John Kerry, who helped craft the deal and was engaged in diplomacy to save it.

“The United States does not need John Kerry’s possibly illegal Shadow Diplomacy on the very badly negotiated Iran Deal. He was the one that created this MESS in the first place!” Trump wrote on Twitter Monday morning.

The United States does not need John Kerry’s possibly illegal Shadow Diplomacy on the very badly negotiated Iran Deal. He was the one that created this MESS in the first place!

While the president has long criticized the Iran nuclear deal, a recent poll shows that almost two-thirds of Americans are in favor of keeping it in place. A poll by CNN and SSRS found that only 29 percent of Americans wanted the country to withdraw from it.

You can watch all of Trump’s speech here.