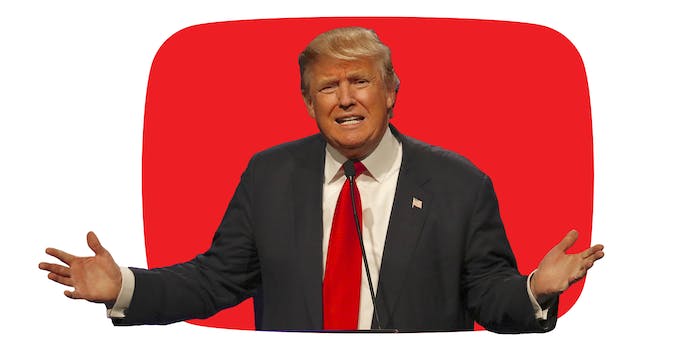 Former President Donald Trump’s involvement in the Capitol riot on Jan. 6 and denial of the 2020 election results led to his permanent banishment on Twitter, YouTube, and Facebook. And while the former president attempted to use a personal blog to communicate with his supporters, it was shut down after less than a month.

It appears he misses his media.

Last month, Trump sued Facebook, Twitter, and YouTube for “censorship of the American people” as the former president described it in a Wall Street Journal opinion piece. On Monday, Trump asked a Florida judge to issue a preliminary injunction that would pressure YouTube to reinstate his account and allow him to continue selling merchandise on his channel.

The lawsuit against YouTube, filed by the America First Policy Institute (AFPI), claims that the ban is in violation of the First Amendment because tech companies were coerced by members of Congress to ban the former president and that they “do not apply their rules consistently,” according to the New York Post.

The AFPI launched in April 2021 as a non-profit, non-partisan research institute. In late April, the AFPI announced the formation of a Constitutional Litigation Partnership, a litigation center “focused on protecting and defending America First policies and constitutional freedoms” that will partner with law firms “to fight against the egregious overreach of Big Tech, Big Media, and Big Government,” according to a press release on the site.

Non-partisan statement aside though, the AFPI team consists of many of Trump’s former policy advisers such as president and CEO Brooke Rollins, who served as head of the former president’s Domestic Policy Council. According to Axios, Trump’s daughter, Ivanka, and her husband, Jared Kushner, are informal advisors to the institute.

The lawsuit is particularly focused on Section 230 of the Communications Decency Act, claiming that the law encourages tech companies to “censor constitutionally protected speech on the Internet,” according to court documents. In truth, the law prevents websites, blogs, and forums from being held legally responsible for the speech of their users.

“Such total censorship continues to cause Plaintiff irreparable harm, endangers democracy, stifles public debate, and may well tip the balance of the 2022 Congressional Elections and the 2024 Presidential Election,” the suit claims.

The suit also alleges that the ban was in violation of the Florida Deceptive and Unfair Trade Practices Act, which protects “lawful business enterprises and the consumers from unethical methods of competition, unreasonable practices or acts during any commerce or trade.”

“While YouTube faces no harm from the reinstatement of Plaintiff’s access to its platform, Plaintiff faces irreparable injury; thus, the balance of hardships manifestly favors a preliminary injunction,” outlined the court documents. “Plaintiff faces loss of his donor and merchandising platforms and ability to communicate his views, content, and endorsements of local candidates.”

The three lawsuits seek an unspecified amount of damages for First Amendment violations, which could surmount to “trillions” of dollars, according to Trump.

The lawsuit also claims that tech companies violated a Florida state law signed by Gov. Ron DeSantis (R) in May aimed at protecting free speech by allowing individuals to sue tech companies if they feel that they have been unfairly censored. However, this law was blocked from being enforced through a preliminary injunction by a Northern District of Florida judge who claims that “balancing the exchange of ideas among private speakers is not a legitimate governmental interest.”

Former Florida Attorney General Pam Bondi, one of Trump’s lawyers during his initial impeachment trial, believes that the lawsuit should go to the Supreme Court.

“These platforms have their billions (of followers) worldwide, and they are controlling the 21st-century town hall,” Bondi told Newsmax. “They’re controlling basically all of the information that comes out from all Americans throughout not only the states but the country.”

The lawsuit lists nine other co-plaintiffs, specifically naming Dr. Kelly Victory and Austen Fletcher, who both had videos removed from YouTube as a violation of its medical misinformation policy. This suit is one of three lawsuits against big tech companies in Florida, which the New York Post said was nearly identical to the others.

The suit claims that Fletcher was shadowbanned by YouTube, which is when moderators and algorithms exclude specific content or creators from suggestions, limiting a creator’s ability to drive traffic to their channel.

Trump’s lawyers said they plan to make similar injunction requests in the suits against Facebook and Twitter in the coming weeks.

No ruling has been issued yet.