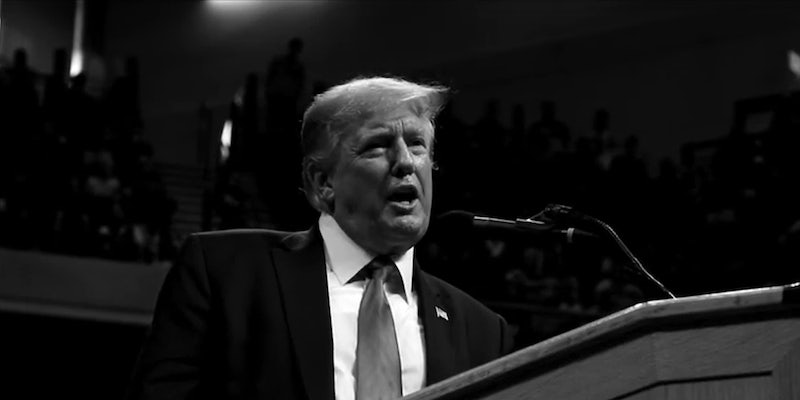 Q posted 'the best is yet to come' multiple times.

Former President Donald Trump capitalized on the attention created by the Federal Bureau of Investigation’s search of his Florida residence by posting an ad teasing a possible 2024 presidential campaign. That ad includes a slogan popular with QAnon conspiracy theorists.

On Monday, the FBI searched Mar-a-Lago seeking documents Trump may have illegally retained from his presidency. Trump and his allies insist he’s done nothing wrong and blasted the search as motivated by Democrats’ desire to keep him from running in 2024.

Trump seized on the moment by posting an ad on his social media platform suggesting he plans to run for president in two years.

The ad describes America in dystopic terms. “We are a nation in decline. We are a failing nation,” Trump says in a voiceover punctuated by the sounds of a thunderstorm, which also arguably invokes QAnon and its obsession with “the storm.”

Trump then lists all the reasons he believes the United States has become “a joke” since he left office a year and a half ago, including inflation, falling stock prices, energy costs, Russia’s war on Ukraine (which he blames on the U.S.), COVID-19 deaths, and crime.

“We are a nation that in many ways has become a joke,” Trump says at the conclusion of this list, his voice rising over the strains of somber, yet hopeful classical music.

“It is time to start talking about greatness for our country again,” he concludes as the words “the best is yet to come” flash onscreen.

Trump appears to be recycling the phrase from stump speeches during his 2020 campaign. He also used it during his farewell address on Jan. 19, 2021.

“The best is yet to come” is among the slogans popular with QAnon conspiracists who believe Democrats and wealthy elites are part of a secret group of baby-raping, blood-drinking Satanists.

The person who masqueraded as Q, a supposed government insider whose posts gave rise to QAnon, wrote this exact phrase multiple times in the three years they were active. One of Q’s final posts before falling silent shortly after the 2020 election included the phrase. Q or someone pretending to be them reemerged briefly this June, then fell silent once more.

QAnon followers didn’t miss the significance of Trump using “the best is yet to come” in his ad. Many accounts with screen names, handles, and bios that include various symbols and slogans popular in the conspiracy theory shared, commented, and liked it.

“If you think America’s story is over, you are sadly mistaken,” commented Truth Social user @wwg1wga. “IT HAS JUST BEGUN. THE BEST IS YET TO COME.”

Trump has yet to confirm whether he’s actually running for president in 2024, although many suspect he will.