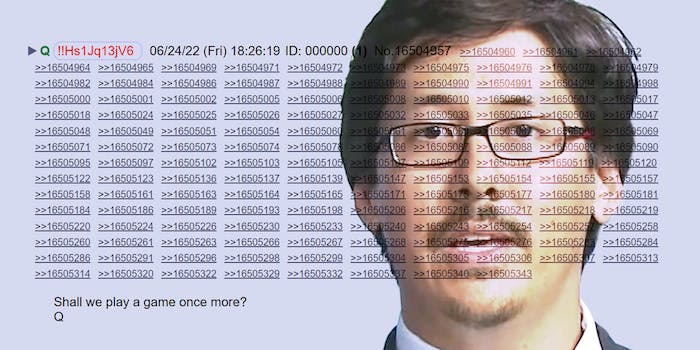 ‘Ron Watkins locked real Q out’: QAnon world is in disarray over whether leader has really returned

Their leader’s disappearance shortly after the 2020 election sent QAnon into a gradual tailspin. Without a steady drumbeat of Q drops, some grew disheartened or simply lost interest.

On Friday, the anons got what they’d longed for: Q posted for the first time in well over a year. Or did they? QAnon can’t decide whether the poster is legitimate.

Now they’re fighting over whether this is the Q of old or some new imposter.

QAnon is a far-right conspiracy theory that a shadowy cabal of Satanic, cannibalistic pedophiles controls the world. They believe this cabal includes many prominent liberals, Hollywood stars, and other elites. They believe Q is a high-level government insider with knowledge about the cabal.

In spite of the conspiracy’s outlandish core tenets, in the three years that whoever played the role of Q was posting, it amassed a following of millions globally. Its followers include members of Congress, celebrities, and scores of citizens from all walks of life who clung to every word Q posted on 8chan then 8kun.

Q’s absence, coming in the wake of former President Donald Trump’s 2020 election loss, caused much of its ranks to dissolve into disarray. Fights between QAnon influencers frequently broke out as they jockeyed for followers, who doubled as a source of income via donations, subscriptions, and purchases. Others might argue the movement is even stronger without its cryptic leader, as numerous believers are in running for office and scoring primary victories.

On Friday, Q, or someone posing as them, posted on 8kun. “Shall we play a game once more,” they wrote. The post was followed by others with open-ended questions that mimicked previous posts.

Many reacted with excitement. Others aren’t so sure that this is the real Q. Although the new posts use the same tripcode that Q used, they note that the site’s entire tripcode system changed mere hours before the first “new” post. Either way, 8kun owner Jim Watkins or his son Ron could have easily provided someone with the code—or it could’ve been hacked.

One or both Watkins could also be behind it. Ron was the site’s administrator until just before the last Q drop and is widely believed to have long played the role of Q.

One of them doing the posts, though, could be proof the drops are real or fake, depending on what tangent of the conspiracy one believes.

“It’s official. The new Q drops are fake,” the Exposing Flynn Networks Telegram channel posted on Tuesday, referencing another tangential conspiratorial belief that former General Mike Flynn—a hero to many in QAnon world and potentially Q—is actually an embedded enemy using the conspiracy theory to run a psychological operation against them.

Flynn, they argue, has now even apparently compromised the Q account. Perhaps from the Watkins.

But even some of the true believers on 8kun don’t think the new posts are authentic. One says that the language is different—specifically that they wrote “use your logic” for the first time instead of “use logic.” This led them and others to conclude that it’s not Q.

“Did Q forget his own language? Fuckery afoot?” they wrote.

QAnon followers who were originally excited about Q’s supposed return have since changed their mind.

Meanwhile, others are trying to rein in the doubters and convince people that this is the real Q. Jim Watkins is among them. In recent days, he’s repeatedly posted links on Telegram to the 8kun board where people can find Q drops.

Even some of his subscribers are skeptical.

“Not one thing to trust… Q is foolishness at this point,” one replied to one such post.

QAnons may have at finally lost trust in the plan. At least for now.