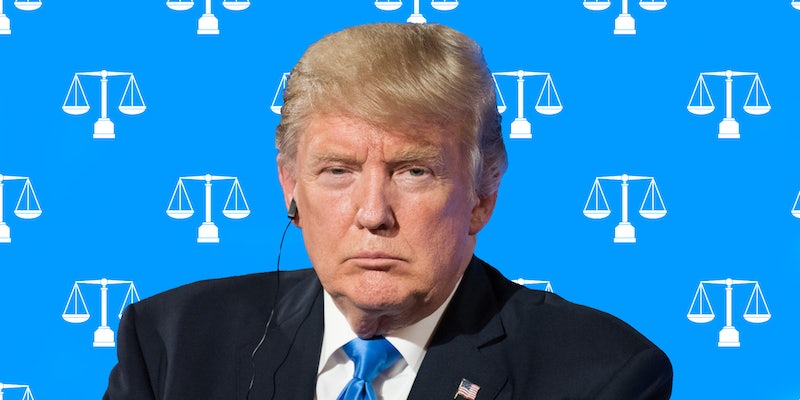 Violating the Presidential Records Act could prohibit Trump from running for office.

On Monday, the Federal Bureau of Investigation (FBI) took the extraordinary step of searching former President Donald Trump’s part-time Florida residence, Mar-a-Lago. Republicans are convinced that the search proves the FBI is part of a conspiracy to prohibit Trump from running for president in 2024.

The court-approved search reportedly sought evidence for a lengthy investigation into whether Trump kept top-secret and other documents from his presidency. Keeping such documents could violate the Presidential Records Act of 1978. Those convicted of violating the act may be prohibited from seeking office.

This isn’t the first time Trump’s been accused of wrongfully retaining or mishandling records from the White House.

Earlier this year, the Washington Post reported that the National Archives retrieved 15 boxes of documents from Mar-a-Lago, which included correspondence with North Korean dictator Kim Jong Un and other classified materials. On Monday, Axios published photos of documents Trump supposedly flushed during his presidency. Trump previously denied flushing documents, which Maggie Haberman of the New York Times details in her upcoming book about his presidency. He also reportedly routinely shredded or tore up documents, which aides then retrieved and taped together in a presumable effort to comply with the Presidential Records Act.

After news of the search broke on Monday, Trump released a statement claiming that it was part of a conspiracy to stop him from running for president in 2024. He insists that the Justice Department is being weaponized against him by extremist Democrats and “the establishment” who don’t want him to seek office.

“Now, as they watch my endorsed candidates win big victories, and see my dominance in the polls, they are trying to stop me … once more,” Trump wrote.

His allies believe it.

Sen. Marsha Blackburn (R-Tenn.) tweeted, “This is a political witch hunt to take down President Trump.”

Former Trump aide Sebastian Gorka said in a videotaped statement, “The FBI is now the political police arm of the Democratic Party and this administration.”

Although the Republican Party recently warned Trump it would stop paying his legal bills if he announces a run for president, GOP Chairwoman Ronna McDaniel echoed allegations that the FBI is acting as Democrats’ political weapon. “This raid is outrageous,” McDaniel tweeted.

Some went further in their comments, urging defunding or even disbanding the FBI. A state representative from Florida even called for FBI agents to be “arrested upon sight.” (In response to complaints about the FBI, many noted that Trump appointed FBI Director Christopher A. Wray.)

In a rare case of bipartisan agreement, many of Trump’s detractors are also convinced that the FBI is seeking evidence to establish he violated the Presidential Records Act.

“He violated the Presidential Records Act & that will disqualify him from EVER holding office again. A win-win in my book!” wrote one.

The FBI has not commented on the matter.