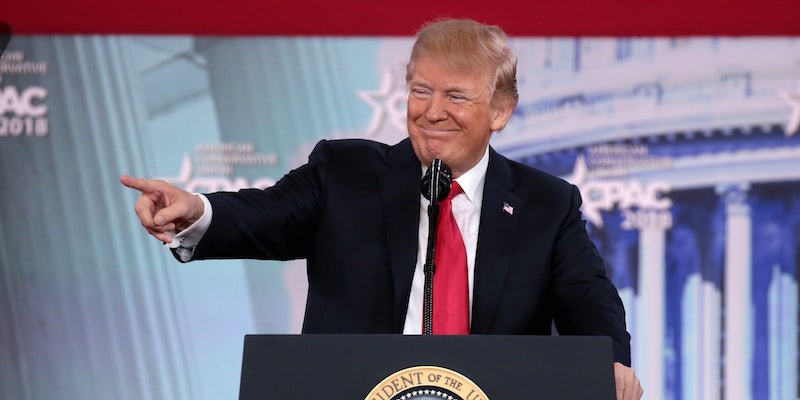 Trump signaled that he may veto the $600 COVID-19 stimulus unless he gets his way.

It took months of negotiation to pass another round of COVID-19 economic stimulus, and less than five minutes to blow it all up.

On Monday night, Congress passed a long-awaited stimulus package that granted $600 to most Americans. The bill was part of larger legislation that included other bills containing a lengthy list of expenditures, many unrelated the pandemic that’s threatening the economy.

Many were disturbed by the stinginess of a mere $600 per person. Apparently, none so much as President Donald Trump. On Tuesday, Trump posted a four-minute video in which he suggested he’d veto the $900 billion bill unless legislators coughed up an additional $1,400 per person.

“Congress found plenty of money for foreign countries, lobbyists, and special interests, while sending the bare minimum to the American people who need it,” Trump said, adding in fitting fashion, “It wasn’t their fault. It was China’s fault.”

“I’m also asking Congress to immediately get rid of wasteful and unnecessary items in this legislation and to send me a suitable bill, or else the next administration will have to deliver a COVID relief package,” Trump said.

“And maybe that administration will be me,” he said, referencing his efforts to thwart democracy by overturning his election loss. “And we will get it done.”

Liberals were stunned. Not only did Trump go against his own party, who insisted on the low figure, but they agreed with what he said.

“Well, HOT DAMN! I need to check outside to see if pigs started flying! I actually agree with a lot of what DJT just said in this video,” said @SmithKish on Twitter. “I’m shocked and don’t know how to feel right now. I need a minute to process…”

“Well, in a battle of Evil vs Evil, Evil still wins, but Evil loses, too,” commented one. “I’ll take it, considering what we’ve been through this year.”

Sen. Lindsey Graham (R-S.C.) emerged as a rare Republican speaking publicly in favor of the $2,000 checks—but he signaled that it should be tied to repealing Section 230 of the Communications Decency Act.

Several people pointed out that many of the items that Trump listed aren’t actually in the COVID-19 stimulus, but were part of the omnibus spending bill it was in. Omnibus spending bills are a tool that allows lawmakers to vote on numerous items simultaneously. It’s not clear if Trump was confused, misinformed or just lying.

It’s also true that Trump could’ve demanded $2,000 at any point, yet he waited until after a deal was made to threaten a veto. Further, his own treasury secretary helped negotiate the $600 stimulus, the Guardian reports.

Some worried that this was all part of Trump’s plan to try to stay in office.

But many people were too thrilled to care about Trump’s potential ulterior motives, falsehoods, and last-minute sledgehammer negotiation tactics.

McConnell hasn’t signaled whether he will schedule a vote on the $2,000 stimulus.