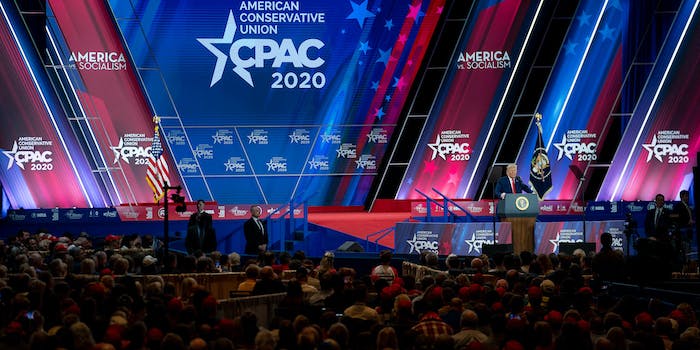 Despite coronavirus scare in February, CPAC is full-steam ahead in 2021

Nothing is stopping them.

The largest annual gathering in the country of conservatives is moving ahead with planning their annual conference—as other large conventions have been canceled due to the coronavirus pandemic.

The Conservative Political Action Conference, more commonly referred to as CPAC, is going foward, according to sources familiar with the planning of the event.

Sources tell the Daily Dot that there have been no plans to delay the gathering, which is slated to happen in winter of next year.

The conference, which is traditionally held in the final weeks of February each year, attracts high-profile conservative speakers such as President Donald Trump, top-level White House officials, and leading conservative pundits.

The Daily Dot spoke with current staffers and interns of the American Conservative Union, the parent company of CPAC, and they all confirmed the move.

The ACU employees agreed to talk on the condition of anonymity.

“Full steam ahead,” one source told the Daily Dot when asked about the planning.

A CPAC spokesperson confirmed the planning efforts but would not issue an official statement on the 2021 conference to the Daily Dot.

At the beginning of the coronavirus pandemic in winter 2020, the CPAC conference was primarily blamed for possibly spreading the virus, due to one attendee testing positive for COVID-19 following the event.

After the initial news broke of a conference attendee testing positive, CPAC failed to disclose the name of the attendee who fell ill, which led to conservative pundits partaking in disaster of a guessing game.

Journalists and attendees, in addition to Senator Ted Cruz (R-Texas), self-quarantined after over fear of spreading the virus.

While CPAC is moving ahead with its annual conference, the American-Israel Public Affairs Committee (AIPAC), another widely attended political conference, has canceled their gathering slated for March 2021 due to the coronavirus pandemic.

AIPAC President Betsy Berns Korn wrote in late May, “On behalf of the AIPAC Board of Directors, I’m writing to let you know that given the continued uncertainties created by the COVID-19 pandemic, and without a predictable avenue to safely bring together thousands of pro-Israel Americans, we have been forced to cancel the 2021 AIPAC Policy Conference.”

Meanwhile, President Donald Trump’s 2020 Republican National Convention is set to take place in Jacksonville, Florida. But that faces new questions given the rising number of cases in the Sunshine State.

In 2019, CPAC brought together 19,000 attendees. Maryland, where the conference is held, currently does not have an official limit on gathering size.

Both the Gaylord National Resort and Convention Center, where CPAC takes place each year, and Maryland Governor Larry Hogan’s office were sent a request for comment on CPAC’s slated plans.

This story will be updated if a comment is received.

Disclosure: Zachary Petrizzo interned at the American Conservative Union in 2018