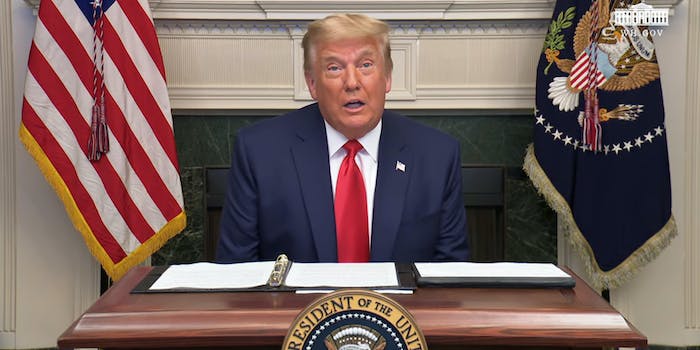 'Why is he sitting at an elementary school desk?'

President Donald Trump spoke with military members and the media on Thanksgiving night—but he delivered his remarks from an incredibly small desk, leading to a lot of jokes online.

During the event, Trump hit a lot of his normal talking points: military spending, Space Force, the coronavirus pandemic, and claims about a rigged election.

But the small desk the president decided to sit at stole the show. People online couldn’t help but notice how tiny the desk was, causing “Resolute Desk” and “Diaper Don” to trend on Twitter.

“This mini resolute desk will never not make me laugh. No, it wasn’t Photoshopped. It’s real. The seal makes it funnier,” one Twitter user said.

“They told #DiaperDon it was the new Resolute Desk, but really it was the kid’s table. #ThanksgivingDay,” another person tweeted.

But other people quickly started mocking the president’s tiny desk, with people calling it an “elementary school desk” and a desk “from a school play.”

After the discussion with military members and the media, Trump also lashed out against Twitter, alleging that the social media website made up its trending topics around the same time the internet was lighting up over the desk.

“Twitter is sending out totally false ‘Trends’ that have absolutely nothing to do with what is really trending in the world. They make it up, and only negative ‘stuff,” the president tweeted. “Same thing will happen to Twitter as is happening to @FoxNews daytime. Also, big Conservative discrimination!”