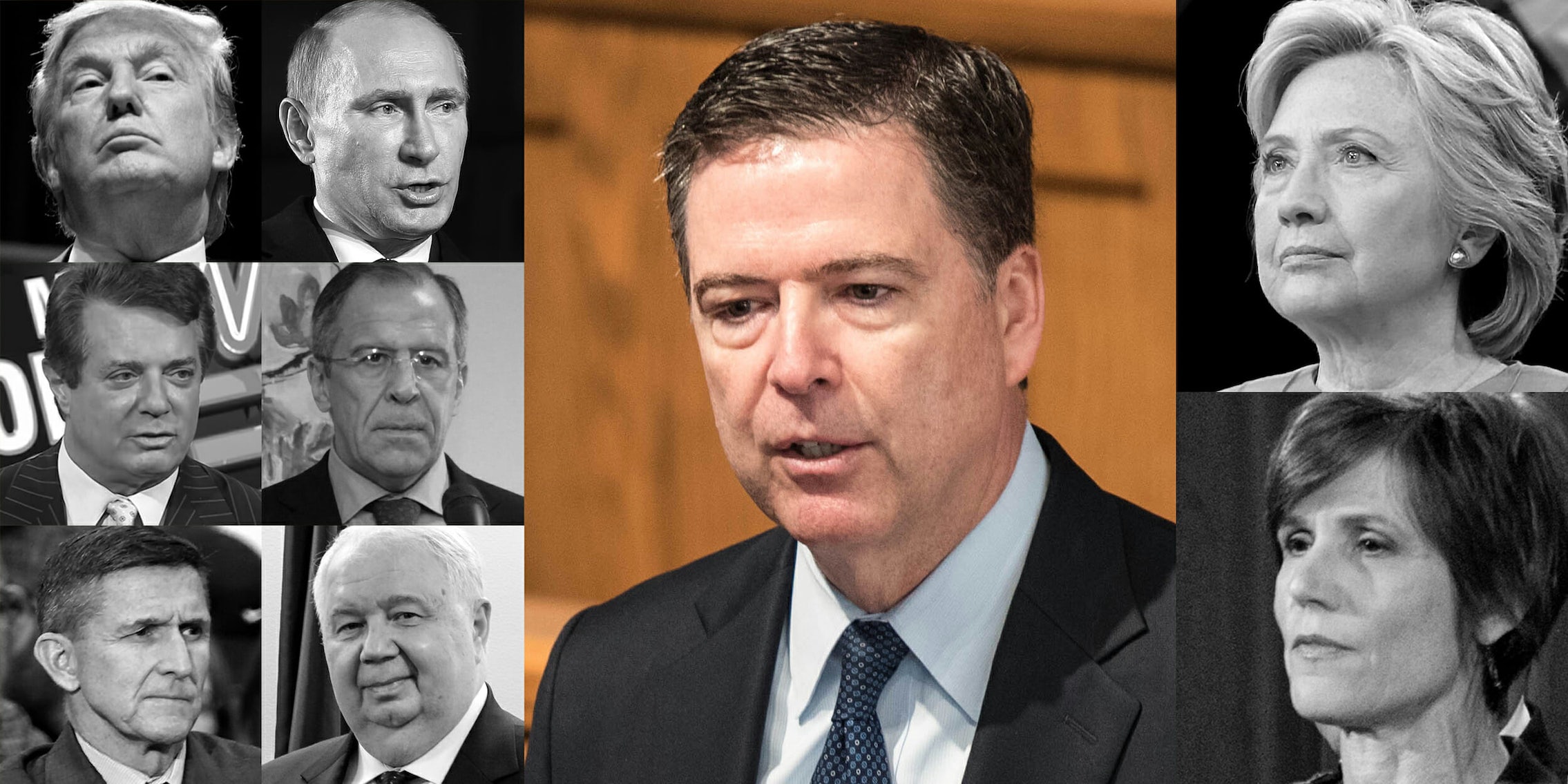 Let's look back at everything that has led up to Comey's testimony.

Feeling a bit overwhelmed by all the moving parts of this whole Trump–Russia thing? You’re not alone.

Former FBI Director James Comey will soon testify before the Senate Intelligence Committee, marking the first public comments he has made since President Donald Trump fired him. Comey’s ouster put him at the center of a tangled, long-spanning web of leaks, suggestions, and reports that make up the ever-growing probe into whether Trump’s campaign colluded with Russia in its attempts to influence the 2016 election.

With the constant barrage of stories regarding the investigation breaking nearly every day, it can be easy to get lost in how exactly we got to Comey testifying before Congress as a private citizen. While Trump’s campaign’s ties with Russia continue to be investigated by five separate investigations, the situation reached a boiling point earlier this month when a sitting United States president fired the head of an agency that is actively investigating his campaign for the presidency.

Let’s take a look back at the events that shaped Trump’s decision to fire Comey and the sprawling amount of information that has come out as the investigations into Russia have intensified.

Dec. 10, 2015: Lt. General Michael Flynn, who would later become Trump’s national security adviser, delivers a speech at an event hosted by RT, a state-run Russian news outlet accused of spreading Kremlin propaganda. He was paid $45,000 for the event—a detail he would fail to disclose while seeking security clearance. According to CNN, U.S. officials noticed an “uptick” in communications between Flynn and Russian officials after the RT event.

Late 2015: British intelligence agencies warn their American counterparts that they detected “suspicious ‘interactions’” between Trump campaign aides and suspected Russian operatives, according to the Guardian.

May 19, 2016: Paul Manafort, first hired on March 28, is promoted to chair Trump’s campaign. In the past, Manafort did lobbying work for pro-Russia officials in Ukraine.

July 5, 2016: Comey says the FBI would not recommend criminal charges against Clinton for her use of a private email system.

July 7, 2016: Page criticizes the United States in a speech in Moscow.

July 26, 2016: The FBI announces it is investigating the DNC hack and subsequent leaks.

Aug. 19, 2016: Manafort resigns from the Trump campaign following reports of his work for pro-Russian oligarchs.

Sept. 5, 2016: The Washington Post reports that the intelligence community is investigating a “broad covert Russian operation” to create distrust among American voters.

Sept. 26, 2016: Page steps down from the Trump campaign after Yahoo News reported that U.S. intelligence was investigating whether he had met privately with Russian officials.

Oct. 7, 2016: WikiLeaks begins publishing emails stolen from Podesta—one hour after the Washington Post released a 2005 Access Hollywood tape in which Trump brags about his ability to “grab [women] by the pussy” with impunity because he’s “a star.”

Oct. 28, 2016: Comey sends a letter to Congress to inform committee chairs that emails found on Weiner’s laptop were relevant to the investigation in Clinton’s use of a private email system.

Nov. 6, 2016: Comey announces that the emails found on Weiner’s laptop do not change the FBI’s recommendation not to file charges. Despite this, Clinton recently claimed she believed Comey’s announcement hurt her as the news came out just 11 days before the election.

Nov. 10, 2016: Russia says it reached out to both the Trump and Clinton during the presidential campaign. Deputy Foreign Minister Sergey Ryabkov said Russia talks with the Trump campaign were “on a sufficient, responsible level.”

Dec. 16, 2016: The FBI concludes Russia interfered with the election.

Dec. 26, 2016: A former KGB official who was suspected of assisting with creating a dossier of alleged ties between Russia and Trump is found dead in Moscow. The dossier would be published by BuzzFeed News two weeks later.

Dec. 29, 2016: The Obama administration announces sanctions against Russia in retaliation for the country’s interference in the election. It was later uncovered that Flynn spoke with Kislyak to discuss sanction relief once Trump is inaugurated.

Jan. 5, 2017: U.S. intelligence agencies release what is considered to be conclusive evidence showing Russia hacked the DNC and Podesta.

Jan. 10, 2017: An unsubstantiated dossier is published by BuzzFeed that claims Russia has compromising information about Trump—including some unverified unusual sexual proclivities. On the same day, Sessions, in a confirmation hearing for attorney general, falsely says he did not speak with any Russians during the campaign.

Jan. 12, 2017: Comey meets with Trump in Trump Tower and discusses the dossier.

Jan. 22, 2017: Trump calls out Comey at an event in the White House, calling him “more famous than me,” presumably referring to his announcement days before the election about the new information in the Clinton email investigation. Comey, who stands six-feet-eight-inches tall, reportedly attempted to blend in with the blue curtains at the event to avoid Trump’s attention.

Jan. 26, 2017: The White House is warned by then-acting Attorney General Sally Yates that Flynn could be vulnerable to Russian blackmail and lied about his interactions with Kislyak.

Jan. 27, 2017: Trump and Comey have dinner at the White House, but both have differing versions of what took place. Comey alleges Trump asked him for his “loyalty.”

Jan. 30, 2017: Yates is fired by Trump for directing the Justice Department to not enforce the first iteration of his highly controversial travel ban on several Muslim-majority countries.

Feb. 10, 2017: The Washington Post reports that Flynn discussed Russian sanctions with Kislyak despite his denials.

Feb. 14, 2017: Trump and Comey meet in the Oval Office. It was during this meeting that Trump allegedly asked Comey to drop the investigation into Flynn.

March 1, 2017: The Washington Post reveals that Sessions lied about meeting with Kislyak during Trump’s campaign.

March 2, 2017:  Sessions recuses himself from any investigations into Russian interference with the election.

March 10, 2017:  CNN reports that the FBI is monitoring links between the Trump Organization and a major Russian bank.

March 16, 2017: Reports reveal Flynn was paid by multiple Russian companies while still holding a top-secret clearance in the U.S., according to records acquired by the House Oversight Committee.

March 20, 2017: Comey confirms that the FBI is investigating ties between Trump’s campaign and Russia during the election.

March 22, 2017:  The Associated Press reports that Manafort “secretly worked for a Russian billionaire with a plan to ‘greatly benefit the Putin government.’”

March 30, 2017:  Flynn offers to testify on ties between Russia and the Trump campaign in exchange for immunity. The offer is turned down.

April 12, 2017:  The Washington Post reports that the FBI acquired a warrant to monitor the communications of Page because it had probable cause to believe he was acting as an agent of a foreign power.

May 3, 2017:  Speaking before Congress, Comey says it makes him “mildly nauseous” to think the FBI had an impact on the results of the presidential election.

May 8, 2017: Yates testifies before the Senate Judiciary Committee. During that time, she reiterates that she warned the White House three times that Flynn could be subjected to blackmail.

May 9, 2017:  Trump surprisingly fires Comey, supposedly based on his handling of the investigation into Clinton’s emails. In his dismissal letter to Comey, Trump bizarrely adds that he appreciated Comey telling him, on “three separate occasions,” that he was not under FBI investigation.

May 10, 2017: Kislyak and Russian Foreign Minster Segrey Lavrov visit the Oval Office. American press is barred from the meeting while a Russian photographer is allowed to attende. Trump reportedly told Kislyak and Lavrov during the meeting that Comey was a “nut job” and firing him relieved “great pressure” off of him, the New York Times reported.

May 11, 2017: Trump contradicts the White House reasoning for Comey’s firing during an interview with NBC News, saying he planned to fire him before receiving counsel from the Justice Department. Trump also calls Comey a “showboat” and a “grandstander.”

May 12, 2017: Trump appears to threaten Comey on Twitter, saying he “better hope” there are not “tapes” of their conversations.

May 16, 2017:  A memo from Comey to his associates shows that Trump tried to have Comey stop the investigation into Flynn, according to a New York Times report.

May 17, 2017:  Robert Mueller, former FBI Director under Presidents George W. Bush and Barack Obama, is named as a special counsel to lead the federal investigation into the Trump team’s ties to Russia.

May 18, 2017: The Associated Press reports that the Trump campaign had at least 18 contacts with Russia during the campaign. Trump also denies asking Comey to end the Flynn investigation.

May 22, 2017:  Trump—unprompted—seems to admit that he told Kislyak and Lavrov about classified information from Israel.

May 23, 2017: Former CIA Director John Brennan said he was “concerned” about intelligence that showed “contacts and interactions” between Russian officials and people involved with Trump’s campaign. The probe has since expanded to look into whether Trump attempted to impede the FBI investigation into his associates.

May 24, 2017: Trump taps longtime ally Marc Kasowitz as an outside counsel to help defend him against the growing probe into Russian connections to his campaign.

May 25, 2017:  The Washington Post reports that Jared Kushner, Trump’s son-in-law, is now a focus in the FBI’s investigation.

May 30, 2017: ABC News confirms that Michael Cohen, Trump’s personal attorney, has now been included in the Senate and House intelligence committee investigations.