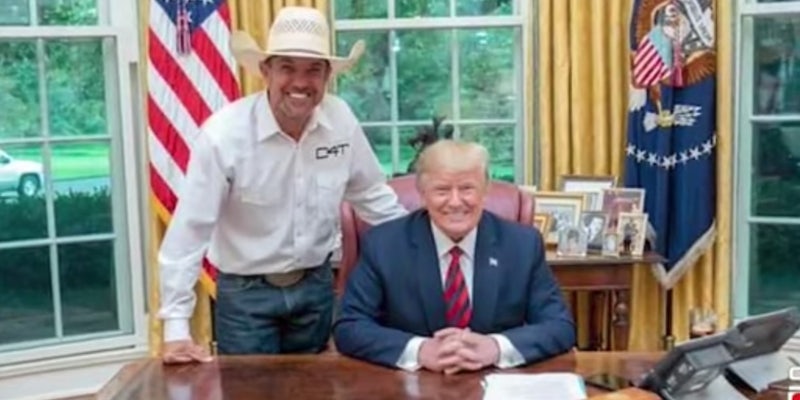 The rioter has since been arrested after threatening to return to D.C. during Biden's inauguration.

President Donald Trump, prior to being permanently suspended from Twitter, retweeted video of a man stating that “the only good Democrat is a dead Democrat.” Now, that very same man has been charged for storming the U.S. Capitol.

Cuoy Griffin, the founder of “Cowboys for Trump” and a county commissioner in New Mexico, was arrested for participating in the riot intended to stop Congress from certifying President-elect Joe Biden’s election victory.

Investigators say Griffin later threatened to return before Biden’s inauguration in a video on Facebook.

“If we do, then it’s gonna be a sad day, because there’s gonna be blood running out of that building,” Griffin said in the video.

Now, Trump’s history with Griffin is being reexamined.

“In May 2020, Trump retweeted a video of New Mexico politician Cuoy Griffin saying ‘The only good Democrat is a Dead Democrat,'” @davenwworld_2 tweeted. “Griffin is one of the terrorists who attacked the Capitol. This is damning evidence of insurrection and it should come up during Trump’s trial.”

Griffin’s remarks stirred controversy at the time and led to bipartisan calls for him to resign. Griffin argued that his remarks were not a call to violence by pointing out that he had stated in the same video that he was merely speaking in a political sense.

Trump, who had met with Griffin in the Oval Office just months prior, retweeted the video alongside Cowboys for Trump’s denial about their founder’s intentions.

Griffin is once again being hit with demands that he resign from office. The politician is also reported to have said that he planned to drive to Washington, D.C. with a rifle and revolver during a county council meeting last Thursday.

Griffin is the latest in a growing number of arrests linked to the insurrection at the Capitol earlier this month, which resulted in the death of five people.