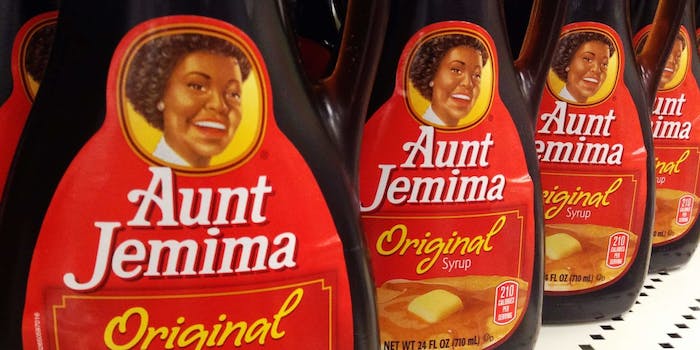 A dream by another name is a nightmare.

Last week, Quaker Oats announced that it would retire the long-criticized Aunt Jemima character from its pancake syrup “to make progress toward racial equality.”

Supporters of President Donald Trump are steamed. They view Aunt Jemima’s overdue retirement as the latest round of cancel culture, and not, as it were, a company making a branding decision to maximize profits and improve public relations.

Last night, at Trump’s campaign event at an Arizona megachurch—IRS tax-exempt status requirements be damned—Reagan Escudé, a Turning Point USA ambassador, had this to say about Aunt Jemima:

“Aunt Jemima was canceled. And if you didn’t know, Nancy Green, the original first Aunt Jemima, she was a picture of the American dream. She was a freed slave who went on to be the face of the pancake syrup that we love and have in our pantries today.”

In reality, Green, the first woman to play Aunt Jemima, worked as a nanny and cook until shorty before her 1923 death and lived with family members because the royalties weren’t enough to live on, Snopes reports. She was buried in an unmarked grave that was finally located in 2015; fundraising efforts are underway to pay for a headstone.

The name “Aunt Jemima” comes from a minstrel song. Quaker Oats’ Aunt Jemima character has long been derided for being based on the racist “mammie” archetype of a matronly, enslaved Black woman who cheerfully cared for white children.

For decades, advertisements for the syrup and pancake mix depicted just this trope.

People on Twitter were quick to point out such facts. Many were confused that someone could be so attached to a brand that denigrates an entire race.

“Since when is being a slave part of the American dream?” tweeted one woman.

Ice Cube dryly remarked that Escudé could be a “future Fox News anchor.”

She appears to have been chosen to speak at Trump’s rally after rising to prominence in the conservative sphere earlier this month for getting fired over an Instagram post in which she said Black Lives Matter “isn’t biblical,” and expounded on “why we as Christians should not support the Black Lives Matter movement.”

“Every protest that we’ve seen thus far in the name of Black Lives Matter has been violent,” Escudé said, falsely.

“All this destruction we’re seeing right now is the result of fatherlessness,” she said, adding that black power is “racist.”