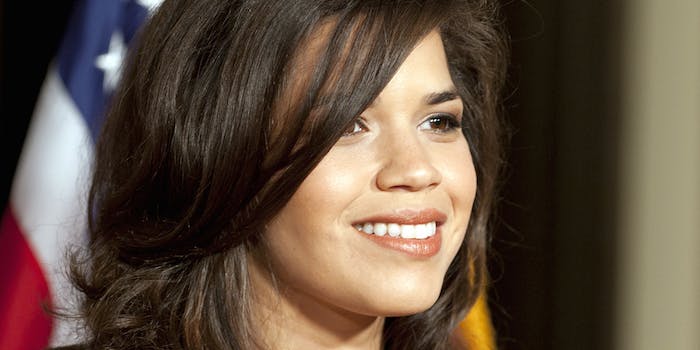 America Ferrera has the best response to Donald Trump’s racism

Actress America Ferrera reached out to presidential candidate Donald Trump on Thursday to thank him for empowering Hispanic voters.

“You see, what you just did with your straight talk was send more Latino voters to the polls than several registration rallies combined!” Ferrera wrote in an open letter. “Thank you for that. Here we are pounding the pavement to get American Latinos to the polls, while your tactic proves most effective.”

Trump has been under fire since his campaign announcement in mid-June, when he called Mexican immigrants to the U.S. “killers” and “rapists.” The comment led to a domino effect of Trump’s business partners abandoning him. NBC recently cancelled his reality TV show The Apprentice, and both NBC and Univision have vowed not to air the Miss USA and Miss Universe pageants, both owned by Trump. On Wednesday, Macy’s, one of America’s largest retailers, discontinued clothing line bearing the hotel mogul’s name. And Serta mattresses cut ties with Trump on Thursday.

“Your negativity and your poorly thought out speech ignited a fire in our community.”

“While your comments are incredibly ignorant and racist, I don’t want to spend my time chastising you,” wrote Ferrera. “I’ll leave that to your business partners like Univision and NBC, who have the power to scold you where it hurts. Instead, I’m writing to say thank you!”

Trump doubled down on his assertions about Mexican immigrants during an interview with CNN’s Don Lemon on Wednesday.

Such comments “will serve brilliantly to energize Latino voters and increase turnout on election day,” Ferrera said in her open letter to Trump. “Do you know why that’s such a big deal, Donald? Because Latinos are the largest, youngest, and fastest-growing constituency in the United States of America.”

“This is the America we are actually living in. I hope by now you understand that without the Latino vote, there is no chance of you ever winning this election. If you don’t believe me, you could ask President Bush or you could even ask President Obama.

“You, Mr. Trump, are living in an outdated fantasy of a bigoted America. Last week, America celebrated some amazing milestones—marriage equality, universal healthcare, removing of the confederate flag—making it clear in which direction the country is moving. That is why racist remarks that play to extremists won’t change the tide, no matter how hard you try. They will only serve to rally more Latino voters to the polls. Your negativity and your poorly thought out speech ignited a fire in our community. Thank you, Mr. Trump!”

In an ironic twist, a photograph of a jacket from Trump’s clothing line went viral on Wednesday; on the inside of the collar was a label bearing the words: “Made in Mexico.”