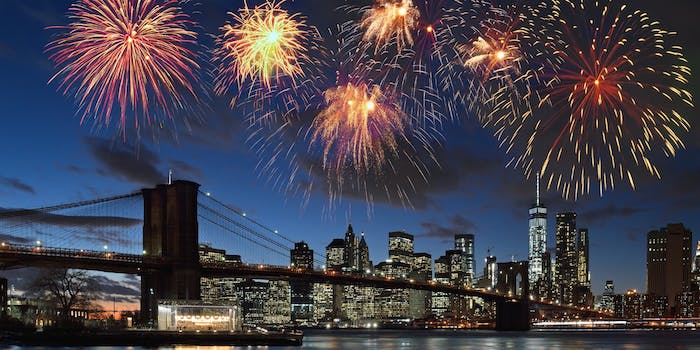 'Every time Black people point out abusive or discriminatory patterns, someone says ‘that’s too ridiculous to be true.''

An increase in fireworks being set off around the country, and specifically in New York City, has caused some to speculate that there may be more at play behind the pyrotechnic activity than current explanations indicate.

In particular, some in communities of color fear the police are planting the fireworks in their neighborhoods—possibly handing them out to teenagers—in order to disorient them or justify a crackdown in those areas and put an end to ongoing protests connected to the Black Lives Matter movement against police violence and racism.

“My neighbors and I believe that this is part of a coordinated attack on Black and Brown communities by government forces; an attack meant to disorient and destabilize the #BlackLivesMatter movement,” Jones tweeted on Saturday.

The idea that the fireworks were planted by police or other government entities has received swift pushback and even mockery online. In response, several Black journalists are defending the so-called firework “conspiracy theorists” and are pointing out that the skeptics are mostly white people who demonstrate ignorance of history by quickly brushing off the claims of people of color.

One Twitter user who referred to the idea that the fireworks have been planted as a conspiracy theory, @socialistdogmon, was particularly cutting in her dismissal.

“Before you post your conspiracy theory about the CIA giving teens fireworks to stoke civil unrest, at least enter this into the twitter search bar and scroll through the evidence that this happens every fucking june. ‘fireworks every night until:2019-07-01 since:2019-06-01,’” @socialistdogmom tweeted.

Clarkisha Kent, a journalist for feminist magazine Wear Your Voice, called out @socialistdogmom for hastily branding the firework claims as conspiracies.

“White people try to storm Area 51 every other year,” Kent wrote under Twitter handle @IWriteAllDay_. “But some fireworks are a bit too much to handle. Bit of a stretch, so to speak.”

In a thread following her original tweet, Kent went on to point out that actions taken by the government against Black communities in the past make it plausible for similar events to take place in the present.

In her own thread, Slate podcast host Nichole Perkins pointed out that white people have always been slow to take the Black community’s concerns seriously on a range of topics.

“A lot of white people keep pshawing the fireworks conspiracy theories… just like they rolled their eyes when we raised issues about poor treatment in healthcare, in media, in Hollywood, in real estate, in banking,” Perkins tweeted from handle @tnwhiskeywoman. “Every time Black people point out abusive or discriminatory patterns, someone says ‘that’s too ridiculous to be true,’ and it ends up being true with irrefutable evidence to back it.”

Mary Heglar, host of climate podcast Hot Take, noted that the historical lens through which Black people and white people view theories, such as current ones about the prevalence of fireworks, are very different.

“If your very existence in this country was not the result of a grand trans-continental conspiracy, and that country didn’t put massive efforts into undermining and subjugating you for literal generations…maybe the theories about the fireworks would sound outlandish… I guess,” Heglar tweeted.

BuzzFeed News reported that aggressive police responses to reports of illegal fireworks have already taken place—such as an incident on June 15 where police showed up to a Brooklyn neighborhood in riot gear.