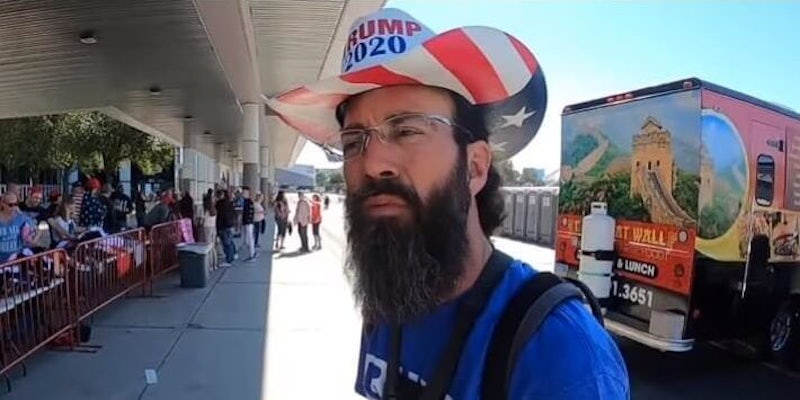 Says she'll pass his thoughts along to Trump.

At President Donald Trump’s Feb. 19 campaign rally in Nevada, a pair of Trump supporters carried an elderly war veteran to his seat.

Afterwards, Trump campaign national press secretary Kayleigh McEnany interviewed one of them. The man, whom McEnany refers to as Jason, turned out to be an ardent QAnon follower.

Jason says that he helped carry the elderly man to his seat out of a commitment to service.

McEnany then asked Jason how he felt when Trump acknowledged him.

“The coolest part about it for me, it wasn’t about me,” he responded. “It was about the shirt I was wearing.

“It was about that ‘where we go one, we go all’ stands for. Right? And nobody had the opportunity to smut that up. And that’s what was the effectiveness of it.”

“That’s why I’m one of the digital soldiers General [Michael] Flynn talks about,” he continued. “That’s why I don’t sleep. That’s why all I do is share information.”

“Where we go one, we go all,” often abbreviated to WWG1WGA, is a slogan of sorts for followers of the QAnon conspiracy theory. They follow a supposed anonymous Trump supporter known simply as ‘Q’ who believes that a global Satanic pedophile cult comprising many prominent liberal politicians and celebrities is conspiring to take Trump down.

Jason’s shirt, as seen in video footage from the rally, includes the slogan.

For her final question, McEnany asked, “If you could say one thing to the president, what would you say?”

“Who is Q?” Jason responded.

“Okay. Well, I will pass all of this along.”

The Trump campaign enjoys ardent support from QAnon followers, a few of whom have been arrested for acts allegedly taken in furtherance of their belief in the conspiracy theory. Trump himself has retweeted QAnon followers on multiple occasions.

Jason later self-identified as Twitter user @QAnon_1972. His bio refers to Q, QAnon, and the Great Awakening, which is what followers often call their conversion into believing the conspiracy theory.

He’s holding out hope that Trump will reveal Q’s identity.