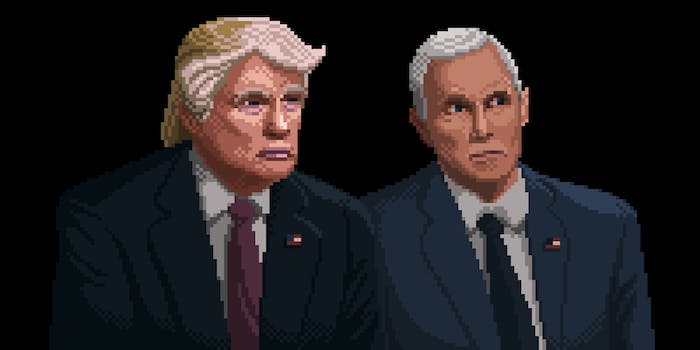 If it weren’t for the humorless affect of Donald Trump, 2016 would be the meme election. Bernie Sanders and Hillary Clinton have squared off with the “on the issues” meme and Green Party candidate Jill Stein even has her own dank meme stash. Trump’s a little late to the party and utterly unconcerned with the digital jokes du jour that compelled an alt-righter to yell “Pepe” at a Clinton rally.

What Trump is after is making America great again through a different online avenue: apps. The Trump campaign quietly launched its America First app on Aug. 18. It has only been written up in major media outlets heading into the weekend because it took until Friday for the GOP nominee’s team to announce it. Unless you’re going off a link from the Trump website, America First is shockingly hard to find when searching for “Donald Trump” in Apple’s app store. Whereas Clinton, whose campaign headquarter simulator app, is the first result when you search her name, Trump’s is the third or fourth result. It’s also the app with the more immediate risk to your privacy.

Following registering either via social network or email, users are prompted for the usual access to one’s phone, including sending notifications and getting ahold of all of your contacts.

Clinton similarly seeks access to your contacts, though that prompt doesn’t come up until you click on your profile and tap the “friends” button in the bottom righthand corner. Her privacy policy is more opaque, instead a reiteration of the overall Hillary for America guidelines.

The app itself is a decently easy-to-navigate simulation of running your own Clinton campaign HQ, complete with paper waste basketball mini-game.

Trump’s is a whole lot busier. It’s got a running social feed of his tweets, a countdown of “time left until we defeat ‘Crooked Hillary,'” and the typical donation asks as well as campaign videos. There’s a quiz about Trump as a person that provides you with no right answers if you get one wrong and is utterly useless on a policy level. Clinton’s corresponding quiz simply attacks her opponent. This is to say nothing of the bizarre ranking system that turns America First into a competitive social app. Users start off as “apprentices,” a nod to… well, you know. By completing rote tasks which exclude the countdown clock and the quiz, users earn points. They ascend up the ranks in hopes of hitting the “Big League.” Clinton’s app offers a reward system similar to that of FourSquare. Trump promises prizes.

This, apparently, is the future of reaching voters already committed to you. Both apps are far more carefree than their corresponding candidates and little is mentioned of pressing issues or meaningful policy. It’s all rote tasks and some light pleasure center stimulation as we march toward the general election.

The America First app is available on both iOS and Android.