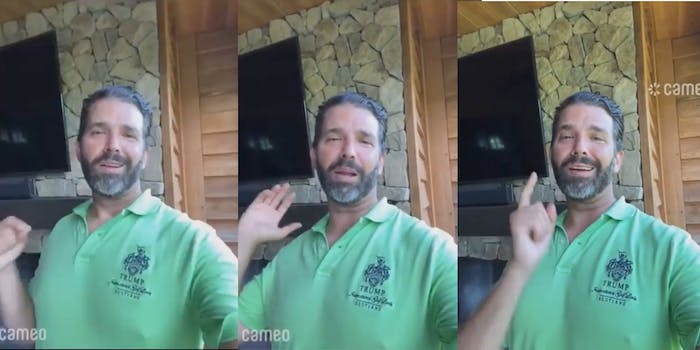 Trump Jr.’s foray into Cameo is leading to another round of drug use speculation

'He can barely keep his eyes open and seems to be unable to breathe through his nose.'

Donald Trump Jr. is once again being accused of abusing cocaine after Twitter users claimed that he appeared intoxicated in a recent video.

In footage uploaded to Cameo, a site where users can pay celebrities to record video greetings, Trump Jr. can be heard congratulating a man on behalf of his fiancé over passing an exam.

The message from the ex-president’s son, however, was largely overlooked. Users on social media instead asserted that everything from Trump Jr.’s eyes to his voice was evidence that he was clearly under the influence.

“Once again, he appears extremely high,” @leahmclrath alleged in a tweet. “He can barely keep his eyes open and seems to be unable to breathe through his nose. Watch until the end when his mask slips. Just painful.”

Trump Jr. appears to have been on the platform since late last month, charging users an eyebrow-raising $500 for a several second long video message.

Although his account has received a perfect five-star rating from his adoring fans, Trump Jr. can’t seem to escape drug abuse allegations outside of his fandom.

“I am no fan of this family but for the love of god junior just doesn’t look like he is doing well,” @2020istrash2020 added.

The allegations that came after his Cameo video are far from the first time that Don Jr. has been accused of using cocaine.

The term “cocaine eyes” become a trending topic on social media in August of last year after Don Jr. gave a speech during the Republican National Convention (RNC).

The drug abuse claims also went viral in late October after Trump Jr. appeared to have difficulty controlling his jaw movements during an interview on Fox News.

He eventually addressed the rumors in November after catching COVID-19.

“I don’t have the red eyes like they claimed I had for apparently using cocaine prior to my RNC speech,” he said of his symptoms at the time. “That is the world of the internet. God knows I troll and do my fair share of it, so I guess it comes back to me, in time, as well. That’s the game.’”

While such claims regarding Trump Jr. are persistent, no available evidence actually indicates that he is abusing cocaine.