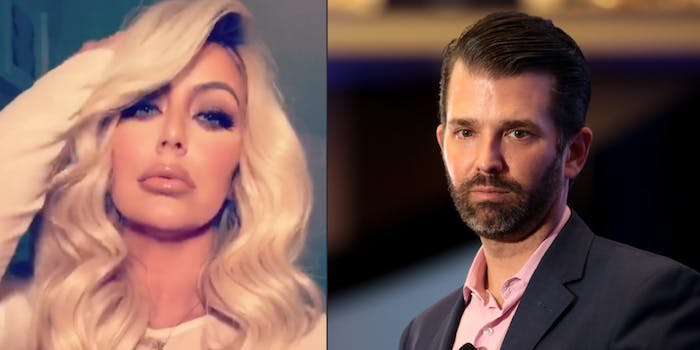 While Aubrey O'Day claimed she used to do drugs with Trump Jr., she declined to provide specifics.

In a series of responses to users on Twitter, O’Day, who met Trump Jr. in 2011 while a contestant on Donald Trump’s reality TV show The Celebrity Apprentice and is alleged to have had an affair with him, suggested that Trump Jr. could potentially be taking prescription drugs.

“I mean he’s either on serious adderol [sic] or conflicted inside,” O’Day said. “He doesn’t look well.. for a while now.”

Speculation about potential drug abuse by Trump Jr. has circulated online for years, although no public evidence has proven the claims true.

O’Day did allege, however, to have taken drugs with Trump Jr. in the past but declined to provide specifics. O’Day did make it a point to state though that she had never seen Trump Jr. use cocaine.

“We did drugs together,” O’Day said to another user. “Cocaine was never one of then, he never showed any interest. So I can’t say that.”

Trump Jr. was also accused of having “cocaine eyes” during the Republican National Convention in August after users argued that his pupils looked suspicious.

O’Day also went on to claim that Trump Jr. secretly hates his father.

It wouldn’t be the first time O’Day has made such allegations. Just in October, O’Day similarly began dishing out dirt about the Trump family.

At the time, O’Day sensationally claimed that Ivanka Trump was “a lesbian on the low” and that Eric Trump slept with a Miss Universe beauty pageant winner” while married to his now-wife.

It remains unknown whether any of O’Day’s stories are actually true or simply gossip.