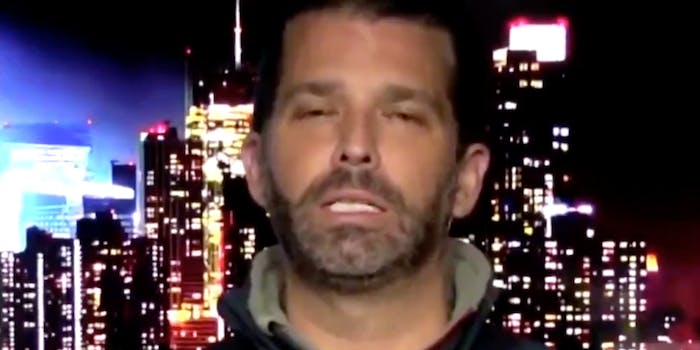 The president's son has been repeatedly accused of drug abuse online.

Internet users are once again speculating whether Donald Trump Jr. has an issue with drugs after footage of his “dancing jaw” went viral.

Users are pointing to a recent interview on Fox News, in which Trump Jr.’s mouth appears to be moving uncontrollably, as evidence of a potential stimulant abuse problem.

Uncontrollable jaw clenching and teeth grinding are common side-effects of drugs such as cocaine and MDMA, although such movements can also be linked to a wide range of non-drug-related issues. Many users online are convinced, however, that Trump Jr.’s facial movements are undoubtedly linked to the regular use of cocaine.

“I’ve done cocaine,” @heytreygr8 said. “I recognize this as cocaine.”

As with any viral internet news story, the memes weren’t far behind.

Some expressed empathy, suggesting that Trump Jr.’s alleged behavior was linked to an alleged abusive upbringing with his father.

“Maybe when his dad loses he can get some help,” @WeAreAllOther wrote. “Every time he says Hunter’s name I think he feels a tinge of jealousy and regret that his father doesn’t care about his addiction or love him like Joe loves Hunter.”

This is far from the first time that Trump Jr. has been accused of abusing narcotics. During the Republican National Convention in August, the term “cocaine” began trending on Twitter after users suggested that Trump Jr.’s pupils looked suspicious.

The president himself has also been repeatedly accused of using Adderall. Footage of Trump during the last presidential debate also went viral online after users suggested that his eyes lit up after Democratic presidential nominee Joe Biden brought up cocaine.

Despite widespread speculation, no public evidence indicates that either the president or his son abuse drugs.