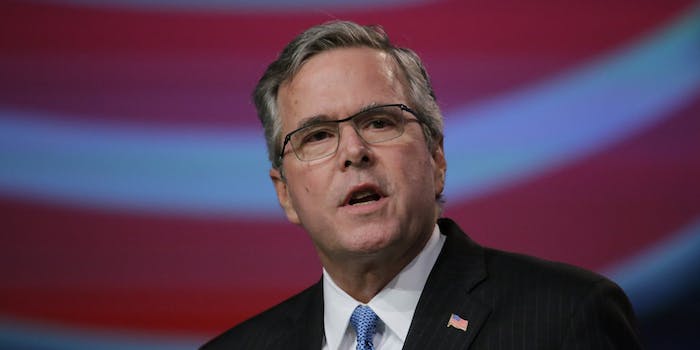 Headed into Thursday’s prime-time presidential debates there is a defined No. 1 coming out of the political preseason. But only Bush has the edge needed to represent his party on a national ticket in 2016—at least according to the Daily Dot Politics team.

Seven contributing reporters and editors ranked their top 10 Republican candidates as the campaign kicks off with more jostling voices than the operatic chunk of “Bohemian Rhapsody.” We measured them not by polling tells, but like a Sports Illustrated preview—based on who has the stomach to endure and backstroke in red balloons come convention time.

A quick word about Ben Carson, the retired neurosurgeon who elbowed his way into the Fox News debate: He finished 11th in our insider’s poll, with only 9 points. (A No. 1 ballot ranking is worth 10 points, a No. 2 is worth 9, and so on.) But Carson’s gate-crashing is a painful blow to serious politicos, like Sen. Lindsey Graham (5 points), BuzzFeed bud Louisiana Gov. Bobby Jindal (4 points), former Pennsylvania Sen. Rick Santorum (4 points), and former HP CEO Carly Florina (2 points)—none gathered enough support to make it into the Big Kids’ debate, which kicks off tonight at 9pm ET on Fox News.

To the finalists, presented with scouts’ takes.

The ‘others receiving votes’ hot tub

“Perry is a much stronger campaigner than his 2012 disaster would let on. Four years ago, Perry was recovering from experimental back surgery and experienced a bunch of health complications that almost certainly led to his ‘oops’ moment. His job-creation record in Texas is strong, and, if he can get over his previous failure, he could do some damage.”

“He’s mean. That’s a plus. Doesn’t let those ‘inside the beltway’ types tell him what’s ‘against the law.’ But he said something nice about Obama. East Coast elite.”

“He woos the Christian vote, but scares away everyone else.”

“In political prediction markets, where people bet with real money about who is going to get the nod, Trump’s status hasn’t even remotely kept up with his poll numbers. Everyone knows a Trump flame out is coming. There are a lot of skeletons from decades of shady business practices hiding in the closets of Trump Tower. Once the media gets over their initial WTF moment and starts digging in, he’s toast. Or he’s the nominee and Hillary wins by 10 points.”

“This is the guy who should win, but won’t because he lacks the soullessness to win.”

“All Kasich needs is better name recognition, and he’ll instantly be a strong contender. The campaign press is fickle and eventually he’ll grab their attention for a bit. Once that happens, he’s in the top tier instantly.”

The philosophical outliers here to destroy each other

“Cruz has almost everything a candidate needs to clinch the nomination, from lots of money to strong support from the base. However, he’s running hard against Washington, which includes the leadership of his own party. GOP leaders hate him with a passion for routinely putting his own fortunes over that of the party.”

“Libertarians love him, but that’s about it. Not enough to take it to the finish line.”

“Since the GOP narrative on Obama’s foreign policy is that the president is too weak, there’s a knee-jerk reaction to be super hawkish in opposition. No amount of backpedaling will counteract everything he’s said. … His brand is a known quantity, and it’s largely not the GOP mainstream.”

“Now that’s a guy I could drink a really upsetting and awkward beer with!”

“He’s basically everyone’s second choice. If enough other major candidates flame out, he’s in line to pick up their votes.”

“A conservative powerhouse with the right big-money backers, a governor of a middle-America state, and a fighter who’s proven he can stand up to an entrenched liberal establishment and win.”

“Jeb has all the money. Just so much damn money. He’s also the pick of the GOP establishment. The last time the GOP didn’t pick the establishment-backed candidate was Goldwater in 1964.”

Photo via NADAPhotos/Flickr (CC BY 2.0)