Talk about an unfortunate typo of historic proportions.

In the finale to President-elect Donald Trump‘s pre-inauguration celebration, a fireworks show blasted above the Lincoln Memorial spelled out what looks quite clearly like “U-S-R” instead of “U-S-A.”

Given all the talk about Trump and Russia, the simple misshapen letter is already sparking a conspiracy theory among Trump’s detractors.

Here’s what it looked like in the video shared by Trump on Thursday night:

Thank you for joining us at the Lincoln Memorial tonight- a very special evening! Together, we are going to MAKE AMERICA GREAT AGAIN! pic.twitter.com/5d774OCx5o

And here’s a GIF, just for posterity’s sake.

Of course, the logical explanation here is that spelling things in the sky with explosions doesn’t always work out precisely as intended. But that hasn’t stopped Americans anxious about Trump’s impending presidency from calling out the perceived misspelling. 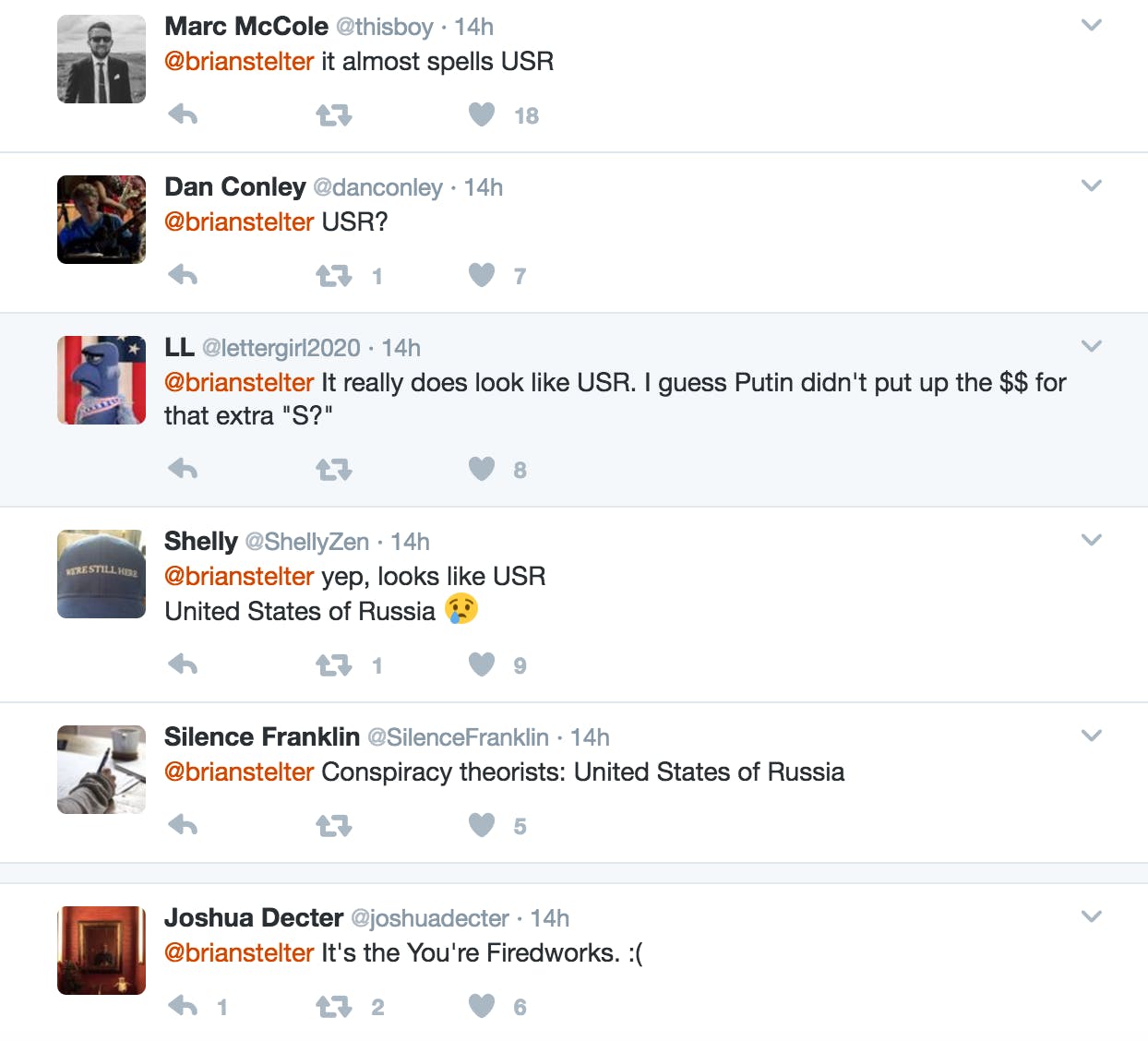 Is it just us or does that "USA" firework look suspiciously like "USR?" #TrumpInauguration pic.twitter.com/4zktBfYArv

Is it just me or did the fireworks at the Lincoln Memorial last night spell out "USR"? pic.twitter.com/ZWFpCYbFLs

How fitting. The fireworks at @realDonaldTrump inaugural concert spelled "USR".

Break out the vodka. The fireworks just spelled out #USR instead of USA. Thank you Russia aka USSR. #trumpinauguration #LincolnMemorial pic.twitter.com/w5lnapRwh9

One of the few publications to report on the mushy fireworks display was Russia Today, a state-funded news outlet that the Columbia Journalism Review describes as the “Kremlin’s propaganda outlet.” The lede from RT’s report definitely isn’t helping stamp down the conspiracy theorists:

A spectacular fireworks display on inauguration eve proved to be a real blast online, as the pyrotechnics left viewers open-mouthed when they spelled “USR” instead of “USA.” The goof prompted Twitter users to joke that Russia had “hacked” the show. Ha-ha.