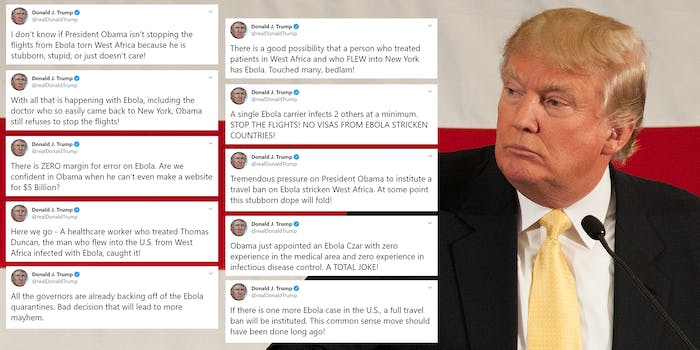 He was terrified of it. Why?

Back in 2014, in the lead up to the midterm election, President Donald Trump hit the conservative media circuit—and the “send tweet” button—repeatedly offering his opinion on the Ebola outbreak, and epidemic that was overwhelming West Africa at thee time.

In typically Trump fashion, he posted his inner grievances and revealed his inner-germaphobe.

Obama: “I will control Ebola.” = Obama: “If you like your health care plan, you can keep your healthcare plan.”

I don't know if President Obama isn't stopping the flights from Ebola torn West Africa because he is stubborn, stupid, or just doesn't care!

At one point, Trump demanded Obama hug every person in the U.S. who may contract Ebola.

President Obama has a personal responsibility to visit & embrace all people in the US who contract Ebola!

From late July to early November 2014, Trump tweeted about the Ebola outbreak nearly a 100 times, critiquing the CDC, Obama’s “Ebola czar,” the president, and a slew of others.

President Obama strongly considering a plan to bring non-U.S. citizens with Ebola to the United States for treatment. Now I know he's nuts!

But Trump’s online response to the new coronavirus is almost a complete 180—swapping an “alarmist” tone for a more “measured” one, said Matthew Wilson, an associate professor at Southern Methodist University who specializes in political psychology and public opinion.

“He had more latitude to pop off in a way that didn’t shape policy direction,” Wilson said to the Daily Dot.

In his very first tweet about the new coronavirus, Trump applauded China’s response to combat its spread, going on to say the U.S. will offer China “any help that is necessary.”

China has been working very hard to contain the Coronavirus. The United States greatly appreciates their efforts and transparency. It will all work out well. In particular, on behalf of the American People, I want to thank President Xi!

We are in very close communication with China concerning the virus. Very few cases reported in USA, but strongly on watch. We have offered China and President Xi any help that is necessary. Our experts are extraordinary!

His approach differs compared to the attack mode he took in 2014, where he used his leverage as a rising GOP figure to stroke fears, helping to make “red states redder,” some say.

In his book, “Epidemic: Ebola and the global scramble to prevent the next killer outbreak,” Reid Wilson writes, “An analysis by the White House’s Office of Digital Strategy later found that Trump’s tweets represented a turning point, the moment when fear of the deadly virus began to infect the American public.”

He also hit at the president for golfing during the epidemic.

President Obama has a major meeting on the N.Y.C. Ebola outbreak, with people flying in from all over the country, but decided to play golf!

And called on him to resign.

If this doctor, who so recklessly flew into New York from West Africa,has Ebola,then Obama should apologize to the American people & resign!

As of now, the coronavirus has caused over 200 deaths in China, and the New York Times reports “all of China’s provinces and territories have now been touched by the outbreak.”

The threat has gotten so extreme, the State Department announced Thursday, with its highest level of warning, that Americans should not travel to China due to the virus.

China being the origin of the outbreak compared to West Africa for the 2014 Ebola outbreak, contributes to Trump’s lack of reproach online now that he’s president, Wilson said.

“The American economy is much more deeply interdependent with the Chinese economy than with the economy of West African nations,” Wilson said.

According to the Associated Press, a White House official and “a Republican close to the White House” said Trump’s response to the coronavirus is all apart of a political strategy to keep relations with China under control.

Another contributing reason to Trump’s Twitter fingers being on a slight hiatus—except in regards to other topics like impeachment—is to assuage any possible fears from the American people, said Chris Federico, director of the Center for the Study of Political Psychology at the University of Minnesota.

“Obviously in 2014, when (Trump) was a public citizen and sort of a public gadfly he had a different set of incentives,” Federico said.

Federico described Trump’s past reactions to Ebola as preying on the “behavioral immune system … This suggestion or this argument that (human beings) may have evolved to respond to fears of contamination of or the perceived prevalence of disease with greater ethnocentrism,” Federico said.

Despite being opposed to Ebola screenings at airports receiving travelers from West Africa back in 2014, instead calling for a complete shutdown of flights, Trump didn’t argue when the CDC announced this month that there would be coronavirus screenings across the U.S.

Similarly, he hasn’t called for an outright flight ban, although some airlines are beginning to halt travel.

“Consistently hyping that threat in a sense advantaged him,” Federico said concerning Trump in 2014. “What’s different now is that he’s president, and his government is technically responsible for anything that happens as a result of a pandemic and outbreak or disease…He doesn’t want to draw attention to things when he is the person in charge.”

Obama is making the Ebola problem much worse than it needs to be in the U.S. by not halting flights from West Africa. Airport testing a joke

Therefore, if Trump radiates composure about the threat of the coronavirus in the States, he does little to worry the American people and possibly trigger further socioeconomic disruption during an election year. The economy has been known to be a major factor in getting a president re-elected, and stocks have fluctuated over various news about the coronavirus.

“Any kind of public sense of panic can really rail the markets, rail the economy,” Wilson said.

Experts say the American people have a more dire virus threat to worry about at the moment than the coronavirus—the flu virus. So far, “more than 8,000 people have died” this flu season, which began in October, according to NPR.

“(The new coronavirus) remains something to monitor, take reasonable precautions against, but it’s nowhere near the magnitude of the annual flu virus,” Wilson said. “Therefore, it’s important that (the American people) not sense alarm from our leaders, especially the president.”

The same could have been said about Ebola. B

ut given his restraint today, it’s proof his entire freakout in 2014 was mostly an opportunistic stunt.