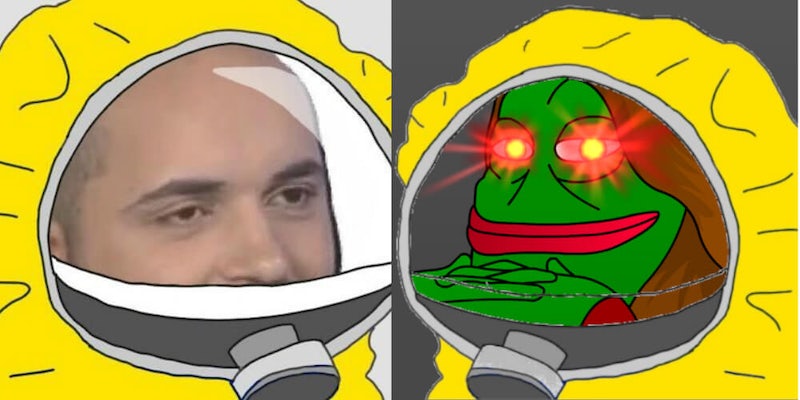 Anti-Chinese sentiments are on the rise amid the coronavirus outbreak.

Far-right Twitter and 4chan users have found a new meme amid the coronavirus outbreak.

On 4chan, users are Photoshopping hazmat suits onto everyone, from Pepe the Frog to Alex Jones, in response to coronavirus, a disease that is believed to have originated in the now-quarantined Wuhan, China. On Twitter, users are doing the same thing with their own avatars.

Twitter user @EyesOnTheRight posted a compilation of several far-right figureheads with hazmat suits Photoshopped onto their avatars and referred to the act as racist.

“A good way of spotting racist dickheads is by looking for the people who photoshopped hazmat suits on their avatars,” EyesOnTheRight wrote.

A good way of spotting racist dickheads is by looking for the people who photoshopped hazmat suits on their avatars. pic.twitter.com/Wy28qq7pjA

In response, some are claiming the meme is simply a “joke,” not racist.

We all might die of the coronavirus and yet some people are more concerned about “racism” towards the Chinese… for giving us it.

Paul Joseph Watson even tried to troll the idea of hazmat suits being racist.

The first instance of the hazmat suit meme, per Know Your Meme, came in a Jan. 22 4chan thread about coronavirus. In the thread, there are racist, xenophobic posts, with some calling for the quarantine of China and Chinese people—or worse.

Furthermore, even the post directly under the source material is rather violent.

However, through looking at the ID of the meme’s creator, it is apparent that they have not posted any verbal examples of racism.

Yet, in the past few days, anti-Chinese sentiments have flooded social media and comment sections.

One tweet from user @jackiehluo highlights some vicious racism on behalf of New York Times repliers.

“Filthy, godless people spreading their disgusting diseases via their lust for foul foods… no wonder it took them 1,000 years to (almost) join the modern world,” one replier wrote in response to a Times story on coronavirus.

Other Twitter users are sharing the racism and xenophobia they have also witnessed recently.

One user shared how her partner, whose of Asian descent, was “hassled at a grocery store about potentially carrying coronavirus in New York.” Another user shared an email documenting how their teacher’s assistant was asked to put a mask on while in class–despite her not having visited China in “many years.”

“Y’all are so fuckin xenophobic it reeks,” the Twitter user wrote, along with a screenshot of the email. “Asking someone to put a mask on when you don’t even know their situation is ridiculous. I hope you know the TA probably feels like shit now. Unbelievable”

Today a student emailed me to say s/he couldn’t come to class because of a fever. S/he is of Asian heritage and mentioned in the email not to worry, it’s not coronavirus. It is horrible how quickly this epidemic was racialized and how fast stigma developed. Let’s stop. Now.

So, taking into consideration the influx of xenophobia seen in the past few days as well as its use by known racists and far-right trolls, the hazmat suit meme could very well be seen as an act of subtle racism.