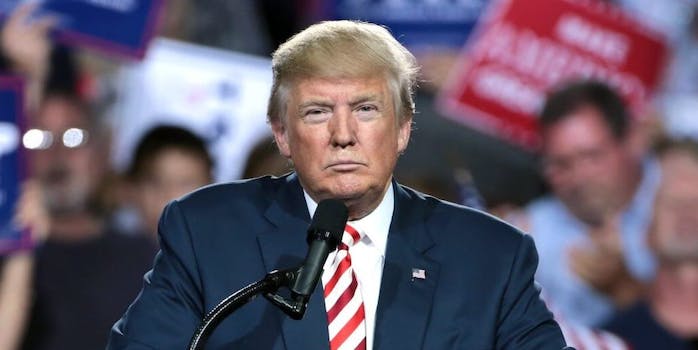 Trump sparks fury after suggesting late congressman is in hell

At a stop in Michigan on his endless campaign, President Donald Trump suggested that the late Rep. John Dingell (D-Mich.) might be in hell.

Dingell, who passed away earlier this year, holds the record for being the longest-serving member of Congress. His wife of 38 years, Rep. Debbie Dingell (D-Mich.), now holds the congressional seat that he occupied for nearly six decades.

Last night, after commenting on Rep. Dingell’s looks, Trump patted himself on the back for letting her husband have a state funeral, calling it “the A-plus treatment.” He said that Rep. Dingell called to thank him and said that her late husband was thrilled by the honor as he looked down from heaven.

Trump then said of the late congressman: “Maybe he’s looking up, I don’t know.”

Though some in the crowd booed and groaned, laughter and cheers can be heard at Trump’s suggestion that Dingell is in hell.

The vast majority of people were anything but amused, however. Many, including members of his own party like Reps. Fred Upton (R-Mich.) and Paul Mitchell (R-Mich.), have called on Trump to apologize for his remarks about the long-serving congressman, who was also a WWII veteran.

Soon after Trump’s speech, Rep. Dingell herself made a heartfelt statement on Twitter.

“Mr. President, let’s set politics aside. My husband earned all his accolades after a lifetime of service,” she tweeted. “I’m preparing for the first holiday season without the man I love. You brought me down in a way you can never imagine and your hurtful words just made my healing much harder.”

Anderson Cooper ripped Trump on CNN, saying Trump “doesn’t talk to his own wife, why would he care about a woman who actually loves her husband?”

Support for the Dingells poured in on social media.

John Dingell was a WWII vet and House member for over 50 years.

For the president to imply he's "looking up" from hell is utterly shameful.

And Mr. President, extending honors for a veteran's funeral is CUSTOMARY & does not absolve you from scrutiny for your abuse of power.

Thank you for speaking out. Michigan is better than Trump.

also my first boss on the hill ❤️

John Dingell was a national treasure, a true patriot and a hero to many of us in Michigan. What kind of a person says such things? Is this what America has become? My heart aches for @RepDebDingell. Our country deserves better than this man. https://t.co/IMCucakaD5

Michigan: let’s have some pride in the home state & wallop the bastard @realDonaldTrump in the #2020Election.

His vile narcissistic treatment of the Dingells deserves a landslide slaughter at the hands of a proud state. https://t.co/K65ohbuwBU

Between his Unabomber note to Pelosi and his bizarre, cruel attack on the Dingells, Trump is doing an outstanding job of steeling Democratic resolve.

That was abhorrent. I’m a Michigander and i take the attack on the Dingells personally.

She stood for 6 hours and greeted 2000 people who came to pay their respects to John Dingell. ⁦@RepDebDingell⁩ Has ⁦@realDonaldTrump⁩ no shame? pic.twitter.com/x3t4dyJGab

The president was, as ever, unmoved.

On a rare round of morning talk show appearances, White House Press Secretary Stephanie Grisham refused to apologize for Trump’s remarks and said that she hadn’t even discussed such with him.

“The president is a counter-puncher, it was a very, very supportive and wild crowd. He was just riffing on some of the things that had been happening the last few days,” Grisham said on Good Morning America. Yesterday, the House voted to impeach Trump; Rep. Dingell was among those who voted in favor of impeachment, which many believe in part inspired Trump’s suggestion her husband is in hell.

Up until days before his death in February, John Dingell maintained a strong political voice, often tweeting disparagingly about the president, who he called an “idiot” a “crook” and “a damned two-bit grifter.”

One of his final tweets proved prophetic.

“Has he apologized yet?” he wrote.

Wherever he is, Dingell’s going to be waiting a very long time for that. Probably forever.