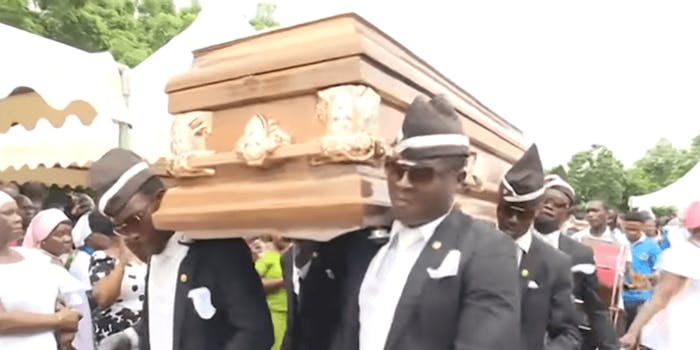 'We're reaching meme levels that shouldn't even be possible.'

Twitter may be the president’s undisputed favorite social media platform, but he’s also known to throw the occasional bone to Facebook—as well he should. After all, Facebook did help carry Donald Trump into the White House in 2016.

This morning, Trump shared a version of the dancing pallbearers meme with Joe Biden’s campaign insignia photoshopped on the casket. The meme has become a favorite for showcasing epic failures during the coronavirus pandemic.

The version Trump shared includes a clip from Biden’s appearance on The Breakfast Club last week. The presumptive Democratic nominee created controversy by telling host Charlamagne tha God, ““If you have a problem figuring out whether you’re for me or Trump, then you ain’t Black.”

Biden later said that he shouldn’t “have been so cavalier,” and insisted that he doesn’t “take the African-American community for granted.”

The Trump campaign has seized on the comment in an effort to appeal to Black voters, only 8% of whom voted for Trump in 2016.

Sharing the meme—which is lifted from a 2017 BBC News Africa piece about a troupe of dancing pallbearers in Ghana—is clearly intended to keep Biden’s latest gaffe alive.

MAGA world thought it was hilarious. Some reflected on the changing nature of political contests now that memes are one of the weapons in campaigns at the highest level.

“Well, call it what you want, but you have to get with the times and change tactics if you want to get your [message] across and win the war and the battle in this era!” commented Sylvia Wilson Namutebi.

Others thought that sharing the video was just another way in which Trump has degraded the presidency and cheapened political discourse.

“If George Washington saw this, he’d turn over in his grave,” countered Karol Wilkosz. “How did get into this low level of politics? Mr. President, this is way below your office.”