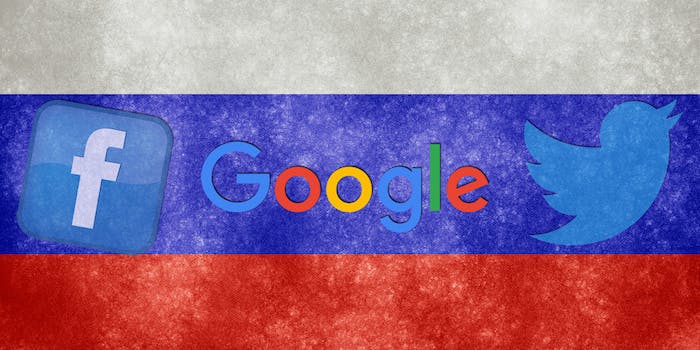 The hearings start on Tuesday.

The indictments of members of President Donald Trump‘s 2016 campaign may have taken center stage on Monday, but a separate and important probe will take place this week when social media giants testify before Congress about Russia’s attempts to sow discord among Americans through their platforms.

Attorneys for Facebook, Twitter, and  will meet with several Senate and House committees on Tuesday and Wednesday to discuss how they were used by Russia to spread disinformation and encourage animosity and discord before the 2016 election.

High-profile names like Facebook CEO Mark Zuckerberg and Twitter CEO Jack Dorsey will not be testifying. Instead, lawyers from the tech giants are expected to speak before Congress.

Facebook announced in early September that a prominent Russia “troll farm” had bought $100,000 worth of ads from Facebook beginning in the summer of 2015. The ads mostly focused on divisive issues like gun rights, immigration, gay rights, and racial discrimination.

The company said “roughly 3,000” ads connected to 470 inauthentic accounts and pages it believes were “affiliated with one another and likely operated out of Russia” were responsible for spreading the disinformation.

The company announced shortly after the discovery that it had turned over thousands of ads to Congress believes were connected to Russia’s attempt to interfere with the 2016 election.

Reports on Monday reveal that Facebook will tell lawmakers that more than half of the companies users in the United States—126 million Americans—were exposed to Russia’s so-called “influence campaigns.”

Facebook was criticized following the election for being a breeding ground for the proliferation of “fake news,” or completely false news that generates social buzz—not news you don’t believe backs up your preconceived notions, as Trump frequently uses the term. It has since announced a number of tools to help users spot fake news.

Twitter has long struggled with the overwhelming number of “bots”—the seemingly inactive accounts or accounts that spew links or other information—for years. However, hundreds of accounts were used by Russia ahead of the election to help interfere with Americans, according to reports.

Researchers found Russia-linked accounts promoting anti-Hillary Clinton narratives, according to the New York Times. One account, @TEN_GOP, amassed more than 130,000 followers by posing as the Tennessee Republican Party and was even retweeted by members of the Trump administration.

In September, the company announced that it had suspended more than 200 accounts it believes were connected to the accounts that purchased ads from Facebook. It also said accounts run by RT, a Russian government-linked news outlet, bought nearly $275,000 worth of ads on their platform during 2016.

Last week, Twitter said it banned RT and Sputnik, a similar news outlet, from buying ads on its social network.

Earlier this month, Google said it discovered that Russian operatives purchased somewhere less than $100,000 in ads across a number of its platforms ahead of the election.

Products including YouTube, Google search, and Gmail were targeted as part of the scheme.

The ads did not appear to be bought by the same “troll farm” that targeted Facebook and Twitter, according to reports at the time.

How can I watch?

You can find a number of the hearings on C-SPAN. Here is a schedule, courtesy of MSNBC, of when the hearings are set to take place: