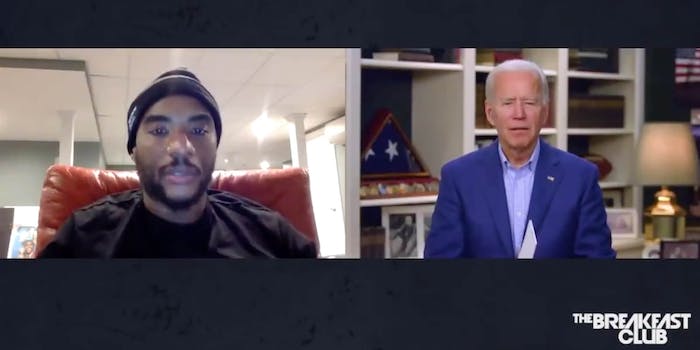 In an appearance on the radio broadcast show The Breakfast Club, Joe Biden said someone “wasn’t Black,” if they were an undecided voter.

“If you have a problem figuring out whether you’re for me or Trump, then you ain’t Black,” Biden said as his interview wrapped.

Host Charlamagne tha God also challenged Biden on the possibility of a Black woman as his running mate.

Charlamagne, born Lenard Larry McKelvey, said the politics of elections had less to do with Biden’s ties to the Black community and more to do with what candidates could offer.

“It don’t have nothing to do with Trump, it has to do with the fact I want something for my community,” Charlamagne said.

Biden also spoke of his search for a running mate, before being cut off by one of his aides.

He offered his record as “proof” of his dedication to civil rights work.

“Take a look at my record, man! I extended the Voting Rights [Act] 25 years. I have a record that is second-to-none,” Biden said. “The NAACP’s endorsed me every time I’ve run. I mean, come on. Take a look at the record.”