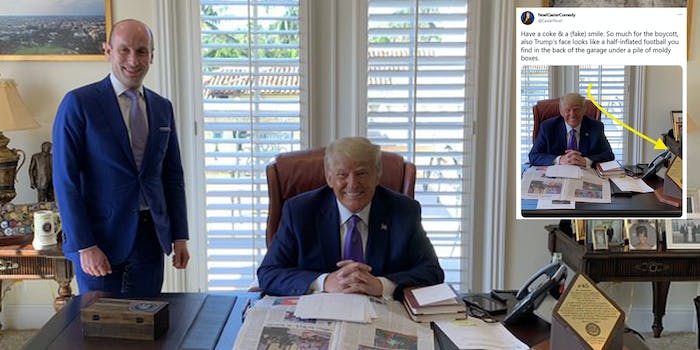 After calling for boycott of Coke products, Trump spotted with Coke on his desk

Not even his calls for a boycott could get in the way of his love for Diet Coke.

Trump’s bond with the soft drink is apparently unbreakable, even after he called for others to boycott the company that makes it.

On Monday, the former president was photographed with what appears to be a Coke bottle hidden behind a phone on his desk just days after calling for people to boycott Coca-Cola and other companies that have spoken out against Georgia’s highly criticized voting law.

Over the weekend, Trump put out a statement urging his followers to boycott Coca-Cola, Delta Airlines, JPMorgan Chase, Major League Baseball, and a number of other companies that have condemned Georgia’s law.

That boycott doesn’t appear to apply to him, however.

Stephen Miller, the former White House advisor, posted a photo of him posing with Trump on Monday afternoon. In the photo, Miller stands next to Trump, who is sitting at a desk. Both of the men have wide grins.

“Just had a terrific meeting with President Trump!” Miller tweeted.

However, many people on Twitter spotted what looks to be a Coke bottle hidden behind a phone on Trump’s desk.

The photo makes it tough to say definitively that it’s a Coke bottle, but given that it was clearly hidden behind the phone for the photo—not to mention Trump’s well-documented love for Diet Coke, as well say his penchant for saying one thing and doing the other—it seems like a safe bet.