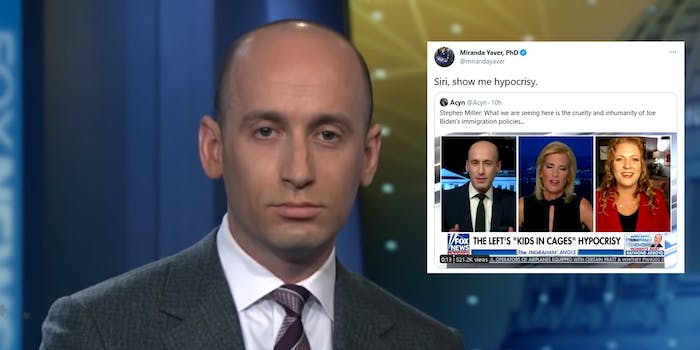 'I thought Stephen Miller was pro cruelty in immigration policies?'

Stephen Miller, the former White House adviser who helped craft the Trump administration’s much-criticized immigration policies, called the decisions being made by President Joe Biden regarding immigration as “cruel” and “inhumane.”

The fact that Miller—who was widely reviled during his time in the White House—could criticize Biden’s immigration policies that way set off people online, who were equal parts perplexed and angry.

Miller made the remarks on Laura Ingraham’s Fox News show. Miller played a key role in the child separation policy of the Trump administration.

“What we are seeing here is the cruelty and inhumanity of Joe Biden’s immigration polices,” Miller said before continuing to criticize the president’s policies, saying that the president’s actions were aiding in human trafficking.

“The only thing cruel & inhumane is having Stephen Miller’s face on my tv,” one Twitter user wrote.

“We’re about 5 minutes away from Stephen Miller claiming that Joe Biden probably owns a hotel and that should disqualify him from being president,” another person tweeted.

They were far from alone. Stephen Miller’s name was trending on Twitter on Thursday morning as thousands of people chimed in on Miller’s remarks.