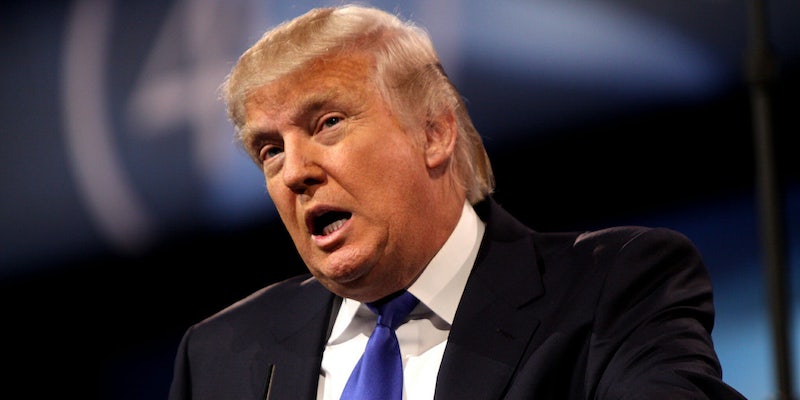 There are plenty of reasons to mock him. This isn't one.

A photo circulated Tuesday of President Donald Trump sipping Diet Coke from a wine glass at the United Nations General Assembly. It was just hours after world leaders literally laughed at him for bragging about his administration, and some people’s first instinct was to mock him for the drink, too.

And why not? As Mashable pointed out, Trump himself once tweeted that he’s “never seen a thin person drink Diet Coke.” He’s also said drinking the soda is “inverse to reason.” Yet Trump still reportedly drinks 12 Diet Cokes per day.

i'm down to shame Trump for this only because he's talked MAD shit about diet coke before. his blood is carbonated with the bubbles of hypocrisy https://t.co/8yac22NOCH

But as the photo picked up viral steam, many on Twitter made this salient point: Plenty of people abstain from alcohol for good reason, so there’s no need to give him grief over his alternative choice.

I’ve seen some Trump critics mock this today. Don’t. People drink, some don’t. They all have their reasons. https://t.co/zya5Ei2cB1

I don’t like Donald Trump at all…but I have done this and am not ashamed at all.

He has reasons for not drinking alcohol and so do I…and there is no shame in that https://t.co/GwB3DbOns2

Good for him. He has powerful family reasons for abstaining. I don't drink either. https://t.co/OuMqCE6FZs

No shame. Not everyone drinks. https://t.co/ot5BwIS2vS

Who cares if it’s not the proper glassware? Some people even found Trump’s gulping Diet Coke while everyone else is drinking alcohol almost makes him … relatable.

The only thing we have in common.

Plus, aren’t we actually glad he’s not drinking? His tweet storms are incoherent enough as it is.

Definitely NO reason to mock Trump for sipping Diet Coke while others are drinking wine.
He already acts like he’s drunk- and a mean, incoherent drunk at that. I could not imagine how much more mayhem the world could take if he drank anything ever. https://t.co/oTUQcRAgTF

And anyway, there are plenty of other things to laugh at him about.