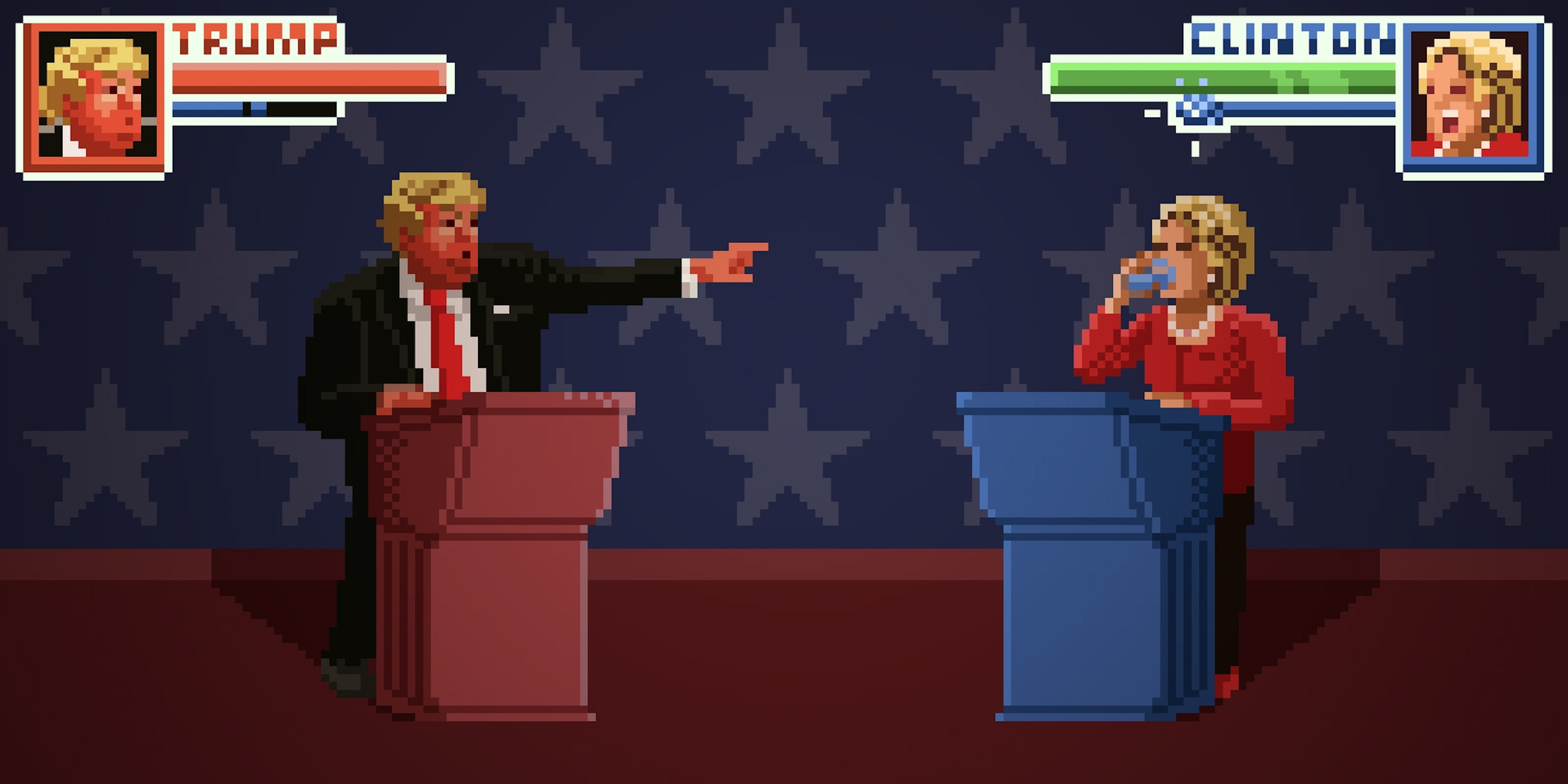 A cynic’s guide to the first Trump–Clinton presidential debate

It'll be the greatest (and most over-analyzed) show on Earth.

You won’t be able to avoid the first presidential debate between candidates Hillary Clinton and Donald Trump, whether you watch it or not.

The 90-minute matchup at Hofstra University is expected to be the most-watched presidential debate in history, potentially eclipsing 2015’s Super Bowl with viewership expected to surpass 100 million. The debate will be moderated by NBC’s Lester Holt will be aired by virtually every major news network and streamed online. Facebook, YouTube, and Twitter will be flooded with live commentary as well as pre- and post-debate analysis.

In short, you’ll have to throw a paper bag over your head sometime around 4pm and not emerge for about a day to successfully avoid the presidential debate.

Which isn’t to say you should. Political scientists and the media are divided about the importance of presidential debates. Viewership for debates are often the highest of any election event of the year, but due to their timing at the tail-end of the election season, the debates come at a time when most voters have largely made up their minds. Washington Monthly looked at multiple studies that analyzed how the debates affected the presidential race. Even in very tight races (which 2016’s is) the debates only gave the winning candidate a nudge in the polls.

This election could be different—particularly because 15 to 20 percent of voters remain undecided. With that in mind, here’s everything you need to know about the first debate between Clinton and Trump.

What time is the presidential debate?

The debate kicks off at 9pm ET tonight, and will last 90-minutes. Be sure to use the restroom beforehand—the entire debate is commercial-free.

How can I stream the debates for free?

What will the format of the first presidential debate be?

Gone are the wild and loosely structured 18-person debates from the Republican primaries. Expect a much more tightly organized, formal affair for the presidential debates, which are organized by the non-partisan, non-profit Commission on Presidential Debates.

The first debate will be divided into six 15-minute segments, focusing on the loose themes of “America’s Direction,” “Achieving Prosperity,” and “Securing America.” The themes are vague and generic-sounding for a reason: CPD included a caveat that they could change in light of recent news developments. Given that much of the weekend’s news focused on the release of body-camera footage of a police shooting in Charlotte, North Carolina, as well as a mass shooting at a shopping mall in Washington State, expect crime and gun violence to come up.

The moderator, Lester Holt, will open each segment with a question and the candidate will each have two minutes to respond, according to the commission’s website. The rest of the time will be used for the candidates to respond to each other, and for the moderator to push for a deeper discussion of the topic.

Sounds pretty civil, right? Not quite. If tonight is anything like the previous presidential debates, including 2012’s match-ups between Republican candidate Mitt Romney, the former governor of Massachusetts, and President Barack Obama, expect plenty of interruptions.

Clinton and Trump have both interrupted their opponents while debating in the primaries, and they could very well do so tonight, when stakes are even higher and both are up against a formidable challenger. Holt will also be able to interrupt the candidates if they go on too long or veer off topic.

Will there be fact-checking?

Probably not by Holt. CPD has stressed that the role of fact-checking should fall to the other candidate, as well as news outlets that are covering the debate. “I don’t think it’s a good idea to get the moderator into essentially serving as the Encyclopedia Britannica,” said CPD’s Janet Brown to CNN’s Reliable Sources.

That means it’s unlikely that if (or, perhaps, when) Trump fudges a statistic or even flat-out lies, he will be pressed by Holt directly to clarify. Clinton campaign aides have pressed Holt and the CPD to have a change-of-heart on fact-checking given the Republican candidate’s dismal track record for accuracy. As of Monday, it doesn’t look like the CPD will budge.

But expect fact-checking in real-time from news networks—Bloomberg TV will fact-check live on screen—as well as a larger-than-ever Twitter-verified fact-checking army hanging on Trump and Clinton’s every word. Expect many of the same wrong claims and untruths that the candidates have deployed throughout campaign seasons to make another appearance.

“We have fact-checked many of the claims they will use on Monday so we will be ready,” said the Washington Post‘s Glenn Kessler, who runs the Post‘s Fact Checker column, in an email to the Daily Dot.

How are Clinton and Trump doing in the polls?

It’s closer between Clinton and Trump than it was between Obama and Romney in 2012 and Obama and Sen. John McCain (R-Ariz.) in 2008. The Real Clear Politics polling average on Monday shows Clinton ahead by 2 points. Trump has all but bounced back from an eight-point deficit late this summer, but he isn’t quite as close as he was in late July. 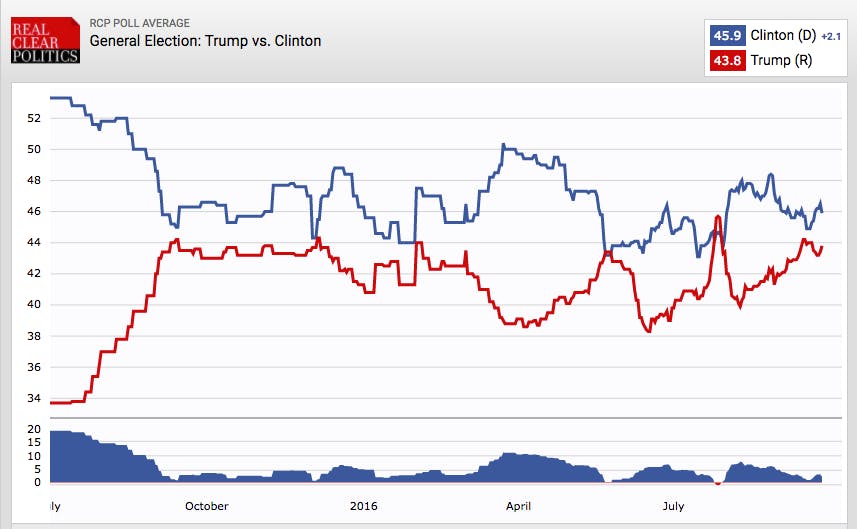 Does it matter who “wins” the first presidential debate?

Historically, it really depends. Debates are graded subjectively by the media immediately afterwards, and Americans are polled on who they believe won in the days that follow. A majority of Americans felt that Secretary of State John Kerry, then the Democratic nominee, won all three presidential debates in 2004. Romney was the declared winner of the first presidential debate in 2012, and third-party candidate Ross Perot handily bested both Democratic candidate Bill Clinton and incumbent President George H.W. Bush in both the first and the third presidential debate. None of the three men who won those debates also secured the presidency.

With Election Day 42 days away, it’s unlikely that the debates will sway either candidate’s current base. Trump supporters who have stuck with him through gaffe after gaffe and accusations of xenophobia, sexism, and corruption are unlikely to be averted now. Same for Clinton’s supporters, many who see the preoccupation with Clinton’s private e-mail server and/or the Benghazi controversy as overblown or a political stunt.

Slip-ups happen during presidential debates, and when they do, they’re monumental. Who can forget the first presidential debate of 2012, when Romney snapped at President Obama, “You’ll get your chance in a moment. I’m still speaking.”? Some criticized Romney for disrespecting the president, others chalked it up to racism. Many flinched when McCain referred to Obama as “that one” in a 2008 presidential debate. Former Vice President Al Gore came off as condescending and egg-headed during the 2000 presidential debates against Republican rival George W. Bush, who had over-prepared in order to overcome his reputation of not being smart.

A candidate’s race, gender, or age can also impact the public perception of their performance.

Every so often, the debates can seal the deal on a candidate whose youth and rhetorical chops outshine a less telegenic rival. The majority of the American public polled by Gallup thought Obama was the winner of all three presidential debates in 2008, and thought the same of former President Bill Clinton in the two 1996 presidential debates. The question of McCain and Republican candidate Bob Dole’s age was bought up in both instances (McCain was 71 in 2008, and Dole was 73 in 1996) Age won’t be an issue in this year’s debate; Trump is 70 and Clinton is 68. But gender might. Many have speculated that Clinton being female could both work for and against her on the debate stage, especially when up against a candidate like Trump, who has bristled at being questioned aggressively by females in the past.