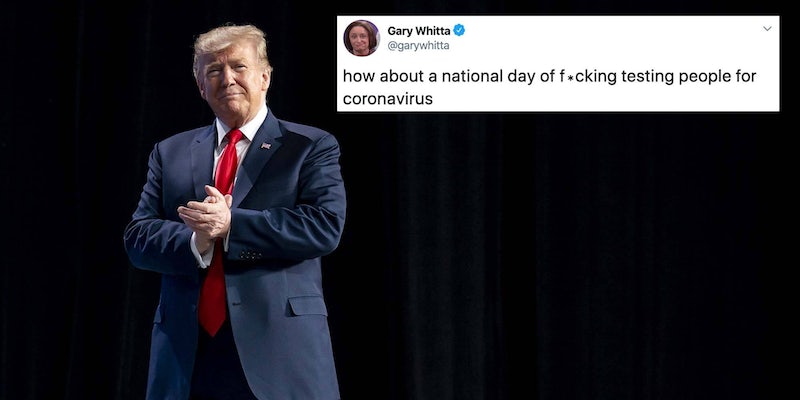 Trump calls for National Day of Prayer amid coronavirus pandemic

'How about a national day of f*cking testing people for coronavirus.'

President Donald Trump declared a National Day of Prayer on Sunday amid the ongoing coronavirus pandemic.

Plans for the decision were announced Friday not long after the president declared a national emergency due to the viral outbreak.

“It is my great honor to declare Sunday, March 15th as a National Day of Prayer,” Trump wrote in a tweet. “We are a Country that, throughout our history, has looked to God for protection and strength in times like these.”

The declaration was immediately met with a slew of reactions ranging from general support to outrage and castigation.

Supporters of the president praised the decision, arguing that prayer was exactly what the country needed.

Many others, however, were less than enthused by the directive.

“Typically we look to science in times like these but you fired all those guys,” Twitter user @briantylercohen wrote.

But many questioned why the president would announce a National Day of Prayer as opposed to, you know, something for combating the outbreak.

“How about a national day of f*cking testing people for coronavirus,” Twitter user @garywhitta wrote.

Some noted that the announcement wasn’t too surprising given that the government usually responds to most issues with “thoughts and prayers.”

Despite the seriousness of the situation, many of the president’s supporters still feel the coronavirus has been overhyped.

Regardless, at least according to one Twitter user, being a Christian makes you immune to the virus anyway.

“I’m in church praying for you fear mongers!” Twitter user @red51259 wrote. “We born again Christians are covered by the blood of Jesus and any germ that touches me dies.”