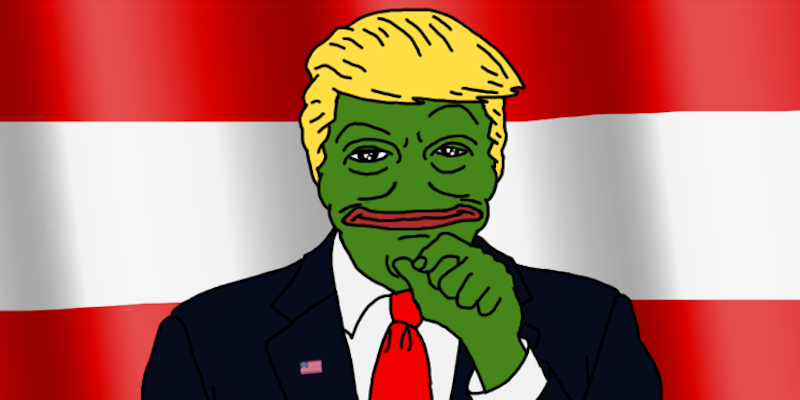 BTFO: How to speak like a fanatical Donald Trump supporter

So you’ve found yourself deep in the heart of Donald Trump‘s internet empire. Consider this is your pocket dictionary. Because what are you supposed to say when someone replies to a post with “BTFO?” You need to be armed (and know that is means “blown the fuck out.”

What is BTFO and other Trump slang?

The former 45th president spoke loudly and carried a big stick, especially online. Any whim that was posted to @realDonaldTrump on Twitter made international headlines. Meanwhile, the hyper-aggressive cheerleading on Reddit’s r/The_Donald community boasted an estimated 65 million page views per month, before it was banned. And the endlessly creative 4chan is deeply in love with Trump, helping fuel the billionaire’s internet brigade.

Before you get any further lost in the online abyss, the least you can do is learn a little Trumpese.

Here is the unofficial English-Trump dictionary.

A modern rebranding of white supremacy. The far-right online social movement gained momentum and national prominence over the course of Trump’s campaign and via the news outlet Breitbart. (Trump’s chief strategist, Stephen Bannon, previously served as Breitbart’s executive chairman). The Southern Poverty Law Center describes the alt-right as “a loose set of far-right ideologies at the core of which is a belief that “white identity” is under attack through policies prioritizing multiculturalism, political correctness and social justice, and must be preserved, usually through white-identified online communities and physical ethno-states.” You can think of Trump’s fringe supporters as a Venn Diagram, with the alt-right, 4chan’s /pol/, and Reddit’s r/The_Donald, overlapping in the middle.

Blown The Fuck Out (BTFO), preferably screamed in all capital letters, is a phrase used to support allies of Trump or the man himself at the expense of his opponents. When Trump writes a zinger against rival Sen. Ted Cruz (R-Texas) on Twitter, you can bet Cruz was BTFO. It’s also possible for Trump’s political enemies to self-BTFO, which is something like stumbling onto a landmine, when r/The_Donald thinks someone they don’t like has made an ass of themselves.

Adopted as a name for Trump supporters, especially from within r/The_Donald, it originated in a popular video that compared Trump to the insect and noted they are “nimble navigators,” a description the group has taken on proudly.

In the context of 2016—where sexual derision is par for the course—the word is used by right-wingers and Trump supporters as an insult against virtually anyone whom they deem weak or spineless.

“A cuck politician is a cuck when he or she takes pleasure in his nation’s people being cheated on,” popular white supremacist blogger Andrew Anglin explained, calling cuck one of the most powerful insults the right wing has in its arsenal.

Cuck is applied to almost all of Trump’s political opponents, be they Clinton supporters, liberals, the Republican establishment, civil-rights activists, Cruz supporters, pro-immigrant activists, social justice warriors, and almost anyone who doubts the Donald.

Reddit is divided into communities called subreddits. “Sub,” in different contexts, means submissive. You know who else is submissive? Cucks, liberals, and Ted Cruz.

This line of thinking led to the “domreddit” name, because no self-respecting Trump fan would be mistaken for someone submissive.

Remember Jeb Bush? What feels like a long time ago, expert talking heads predicted he’d be the 2016 Republican presidential nominee. Then he ran smack into Trump during the debates.

Among other stinging insults, Trump called Bush “low energy.” Like so much in the Trumpire, centipedes made it a meme. Now any enemy of Trump is low energy (and probably a cuck, too). Any ally or act of support is “high energy.”

And because the laws of physics say energy can neither be created nor destroyed, we’re going to be stuck in 2016 campaign season forever. That’s just science.

Exactly when was America last great? The most popular answer by far, among both Republicans and Democrats, is 2000. That might seem odd—ironic, even—given that was also the end of former President Bill Clinton’s eight years in the White House.

Pepe originated in a 2006 comic book called Boy’s Club but became one of the most popular memes on the internet before it was co-opted by the alt-right (see above). The frog’s internet stardom originated in 4chan and spread through vectors like Reddit, Tumblr, and Twitter.

It’s difficult to explain Trump supporters’ love of 4chan-style memes. They think they’re funny. They’re having a good time. They’re being ironic. But, most of all, they know it works to get attention to their messages.

Pepe has been so thoroughly co-opted into an icon of the cyber Trump empire that Trump himself retweeted a Pepe meme. The Anti-Defamation League officially lists Pepe as a hate symbol.

When Sen. Bernie Sanders (I-Vt.) and Hillary Clinton talk about being progressive, they mean they’re forward-looking left-wing politicians who will help lead humanity forward. The counter-name call, long used by conservatives and wielded by Trump supporters in particular, is to say they’re regressive: dragging us backward, despite promises otherwise.

“Shill” is an insult seen all around the Trumpverse, meaning a stooge trying to artificially drum up opposition to Trump or support for one of his political rivals. “Shillary” is the insult applied directly to Hillary Clinton, calling her a fake and phony. A Shillbot or Clintonbot is a Hillary supporter who is brainwashed or programmed like a robot.

Time for a lesson in 1980s cool. Did you know that when Michael Jackson sang that song “Bad” he actually meant someone was good, hip, dangerous, and righteous in a cutting-edge kind of way?

Taking a page right out the Michael Jackson playbook, shitposting means good posts with bad behavior. It has roots in older communities like Something Awful and 4chan, which celebrates the shitpost like no other.

The shitpost is a troll, a deliberate provocation designed for maximum impact with minimum effort. It’s bad. It’s good.

Here’s an example. In most communities, posting a bunch of memes and insulting one-liners would warrant a ban. In shitpost-friendly territory like r/The_Donald, it’s great, it’s viral, it gets supported, voted up, and amplified.

Shitposting can often be seen dominating the front page of Reddit to an audience of many thousands when the entire The_Donald community pushes their preferred shit to the top of the pile.

SJW is the insult tossed by conservatives at liberals who advocate for socially liberal causes like feminism and increased civil rights for minorities.

The SJW is seen by Trump supporters as shrill, stupid, and politically correct to the point of insanity. They are cucks and low energy regressives, the thinking goes, who are BTFO by Trump.

One age-old popular conservative meme is that liberals are too sensitive.

There’s truth to this stereotype, no doubt about it. There’s also some glaring hypocrisy. Anyone who was against the Iraq War in 2003, for example, can testify as to just how sensitive conservatives can be to criticism against what they hold dear.

Today, a trigger warning is a heads-up that the following content could traumatize someone with mental health issues or past traumatic experiences. Violence, domestic abuse, rape, war, and more can be subject to trigger warnings, depending on the person. On the extreme end of the movement, some advocates want university courses to use trigger warnings.

This plays right into the idea that liberal political correctness—a vague idea against anything that offends people—is excessive and in need of being cut down to size. That idea lies at the heart of Trump’s appeal, so it’s no surprise to see triggering regularly get roasted by Trump’s supporters.

When a Trump supporter posts something they believe is truthful but cutting, that may offend political opponents, you might see a #triggered hashtag.

Many Trump supporters see a host of political opponents who are weak and thin skinned, so giving offense is a badge of honor.

If you #Trigger your opponent with a sharp shitpost, consider them BTFO.

When someone makes a particularly well-loved post, Trump supporters will sarcastically respond with “You’re a fucking white male!“

The idea is that opponents of Trump believe someone being a white male invalidates their ideas from the get-go.

The meme originates from a March 2016 Alex Jones video showing a conversation and shouting match between Trump supporters and protesters in St. Louis.

In an exchange over immigration and comparing Trump to Adolf Hitler, one white male Sanders supporter (who was immediately found and berated by the internet hordes) yelled at another white male Trump supporter, “You’ve never experienced oppression in your entire fucking life, neither have I, YOU’RE A FUCKING WHITE MALE!”

A few seconds of back-and-forth yelling caught on camera is about all it takes for a Trump meme to be born. What a time to be alive.

Editor’s note: This story has been updated for context and to include additional terminology.