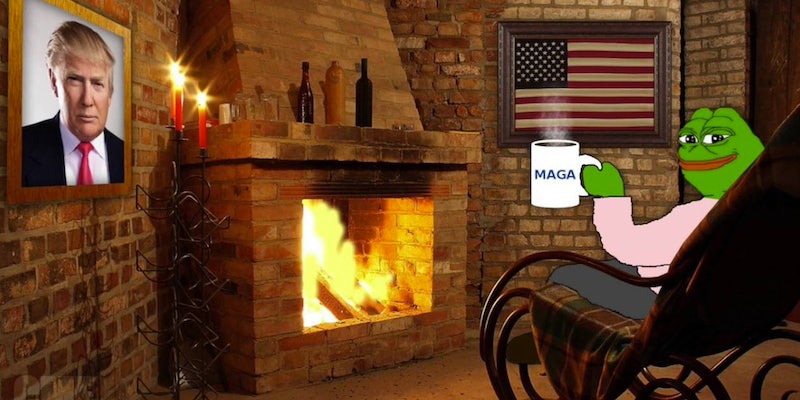 The saga of Pepe the Frog has taken another disturbing turn. The once-innocuous meme has been co-opted by the alt-right, adopted into Trump’s Deplorables and soundly rejected by the Clinton campaign, which claimed Pepe is “a symbol associated with white supremacy.”

I like how Rudy Giuliani is outranked by a Pepe meme pic.twitter.com/CsH0XphJkt

On Tuesday, the pot for Pepe officially began to boil. The Anti-Defamation League (ADL) added the meme to its “Hate on Display” database. The database was started in 2000 to provide “an overview of many of the symbols most frequently used by a variety of white supremacist groups and movements,” according to the site. It includes more than 150 symbols and images, such as the swastika, the Confederate battle flag, and Blood Drop Cross.

Pepe was created by Matt Furie in 2005 for his comic Boy’s Club. “In this book, Boy’s Club, he’s a cool, chill frog dude that likes to hang with his friends and drink pop and watch TV,” Furie told the Daily Dot recently. “He’s certainly not racist, as he hangs with a bird-dog, a wolf-like creature, a semi-mutt person, and a dude with round ears that is possibly a muskrat or maybe a bear. These dudes don’t even know what they are and it’s not important cause they are all different and they are all friends. The online Pepe is just a reflection of things that people think are funny on the internet.”

“Once again, racists and haters have taken a popular Internet meme and twisted it for their own purposes of spreading bigotry and harassing users,” Jonathan A. Greenblatt, CEO of ADL, said in a statement. “These anti-Semites have no shame. They are abusing the image of a cartoon character, one that might at first seem appealing, to harass and spread hatred on social media.”

Furie tried to assure us that the meme’s alt-right affiliation was “just a phase” that would soon pass.

“[I]t’s not the first time Pepe has been reclaimed for evil, and no one will care about it come November,” Furie told the Daily Dot on Sept. 13. “I predict that his sly, lovable, and charming status will be intact as early as next week.”

Unfortunately, that no longer appears to be the case. Feels bad, man.