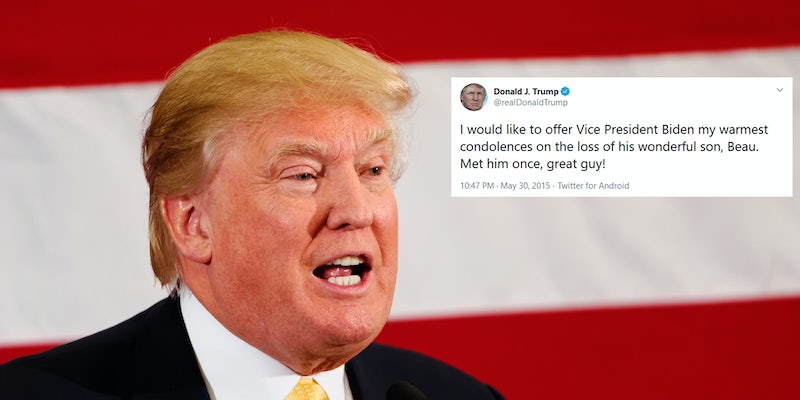 Trump tweeted that he met Beau Biden and that he thought he was a 'great guy.'

President Donald Trump insisted on Tuesday that he didn’t know Beau Biden, former Vice President Joe Biden‘s late son, but like countless times before, his tweets contradict what he proclaimed.

Beau Biden was brought up by the former vice president during the first presidential debate on Sunday night. The Democratic nominee brought up his son while discussing reports that Trump called members of the military “losers,” among other things.

Beau Biden, 46, died in May 2015. He was an Iraq war veteran and served as Delaware’s attorney general.

“Speaking of my son, the way you talk about the military, the way you talk about them being ‘losers’ and just being ‘suckers.’ My son was in Iraq, he spent a year there. He got the Bronze Star, he got the conspicuous service medal. He was not a loser, he was a patriot, and the people left behind there were heroes. And I resent like hell—” Biden said, before being cut off by Trump.

In May 2015, just ahead of his presidential run announcement, Trump said he had met Beau Biden and that he thought he was a “great guy.”

“I would like to offer Vice President Biden my warmest condolences on the loss of his wonderful son, Beau. Met him once, great guy!” Trump wrote in May 2015, just weeks ahead of his presidential announcement.