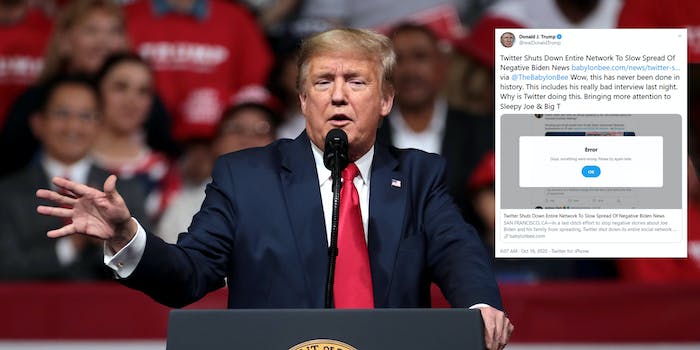 President Donald Trump retweeted a link from the Babylon Bee, a satirical Christian news site with a conservative bent, early Friday morning but appeared to think it was real.

The president shared a story from the Babylon Bee that said Twitter shut down its “entire network” to slow the spread of a controversial story from the New York Post about Hunter Biden, former Vice President Joe Biden’s son. The sourcing of the story has raised questions about it.

Twitter suffered a relatively short outage on Thursday evening and has taken heat from Republicans for its decision to block the sharing of the New York Post link earlier this week.

All of that was packaged together by the Babylon Bee, whose story has the headline: “Twitter Shuts Down Entire Network To Slow Spread Of Negative Biden News.”

While it’s not certain the Trump thought the story was real, his tweet about it does seem to point in that direction. For what its worth, the Babylon Bee’s site editor told the New York Times earlier this week that the president “does know it’s satire.”

“Wow, this has never been done in history. This includes his really bad interview last night. Why is Twitter doing this. Bringing more attention to Sleepy Joe & Big T,” the president tweeted along with the Babylon Bee story.

The Babylon Bee is upfront about the fact that it is satire. The publication’s Twitter bio promises “fake news you can trust,” and the website’s “about” page boasts that it is “the world’s best satire site, totally inerrant in all its truth claims.” It urges disgruntled readers to “take it up with God.”

That being said, it is not uncommon for people to fall for satirical news—you just normally don’t expect the president to be the one to do so.

Many people were convinced Trump was duped by the story, and predictably cracked a lot of jokes about it.

Many people brought up the “crazy uncle” quip from Trump’s town hall event on Thursday night, where moderator Savannah Guthrie pressed the president for not being “someone’s crazy uncle who can just retweet whatever,” specifically conspiracy theories.

In response to Trump’s Twitter gaffe, the Babylon Bee on Friday tweeted a link to a 2018 article titled: “President Trump Declares The Babylon Bee His Most-Trusted News Source.”