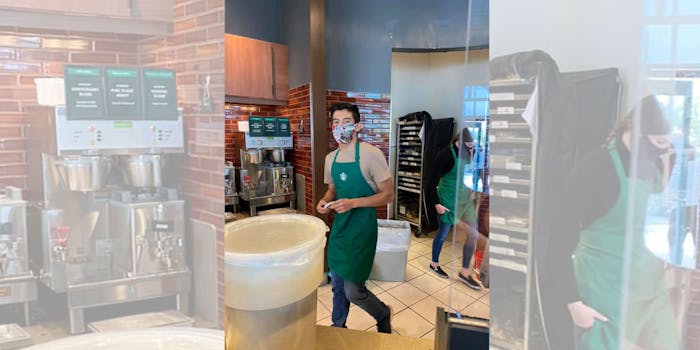 The woman posted his photo and name. She ended up getting shamed, and people set up a 'virtual tip jar' for him.

A woman tried to shame a Starbucks barista who refused to serve her because she wasn’t wearing a mask. She ended up getting shamed, and he ended up with over 20,000.

The woman, Amber Lynn Gilles, posted a photo of the barista, Lenin Gutierrez, with the caption, “Meet lenen from Starbucks who refused to serve me cause I’m not wearing a mask. Next time I will wait for cops and bring a medical exemption.”

“Are you really crying cause you had to wear a mask for 10 minutes to get coffee then leave?” one commenter wrote. “Is it really that hard? Just wear the mask, get your coffee then take it off when you leave Karen, Jesus Christ.”

The post backfired on Gilles even more after Matt Cowan saw it and subsequently set up a “virtual tip jar” for Gutierrez, raising over $22,000.

On Facebook, Gutierrez explained what went down. He said Gilles approached the counter to place an order, and when Gutierrez asked if she had a mask, she told him that she didn’t need one. He was going to show her the Starbucks guidelines requiring masks when entering the store, but she began “cussing up a storm.”

“She started calling people sheep and she left. Within a few minutes she came back and asked for my name, she took a photo of me and said ‘I’m calling corporate’ and started cussing some more at everyone and just left,” he said.

Cowan later explained via the GoFundMe campaign that he is “Raising money for Lenin for his honorable effort standing his ground when faced with a Karen in the wild.” Soon after the campaign was launched, donations began to flood in. Both Gutierrez and Cowan expressed their gratitude.

“I set it at $1,000 thinking that was a reach but we would be lucky if we hit like $250 and when we hit $100 I was overwhelmed by that,” Cowan told KGTV. “Everybody is rallying around somebody for doing what they’re supposed to do and trying to protect everyone else. It just goes to show you there are a lot of good people out there and that outweighs the bad.”

Gutierrez posted a two-minute video to Facebook to thank his supporters. He said he plans to use the money to once again become a dance instructor working with children.