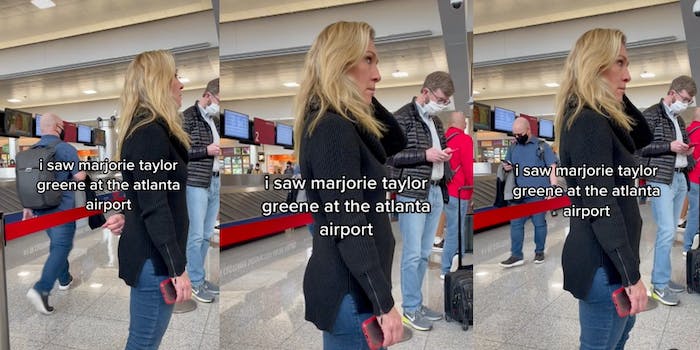 ‘I’m a socialist’: TikToker trolls Marjorie Taylor Greene while she waits in an airport

'Respect should be earned.'

A TikTok user found herself standing next to Rep. Marjorie Taylor Greene (R-Ga.) while waiting for her baggage at an airport in Atlanta.

Footage of the encounter, which was uploaded to the social media platform on Saturday, shows Greene just feet away as the TikTok user @eva_baker loudly discusses her left-leaning views with another individual off camera.

“I just love voting in Georgia for Democrats,” she says, later adding: “That way we don’t have to get the nasty COVID spread to us.”

The video, which has been viewed more than 1.1 million times, continues with Greene seemingly attempting to ignore the TikTok user’s remarks.

The majority of TikTok users who responded to the video appeared to support the attempted trolling.

“SHE WAS TRYING SO HARD NOT TO LOOK,” one user wrote.

Countless others noted how Greene, who claims to have rejected the COVID-19 vaccine and compared coronavirus mask mandates to the Holocaust, appeared to be the only one in the footage who was not wearing a face mask in the airport.

“In the airport NOT WEARING A MASK,” another user said. “HOW THE HELL ARE THEY ALLOWING HER TO DO THAT KNOWING SHES UNVAXXED???”

But not everyone appeared to support the TikTok user’s actions. A handful of users criticized @eva_baker in the comment section as well.

“I just love making videos saying random stuff that I don’t understand because I’m not capable of critical thought,” one user said.

In a follow up video on Sunday, @eva_baker responded to critics who accused her of being disrespectful by stating that “respect should be earned.”

The TikTok user made specific mention of Greene’s harassment of Parkland shooting survivor David Hogg in 2019 before she was elected to Congress.

“You say that I shouldn’t disrespect this woman because I don’t agree with her views, but isn’t that exactly what she did when she harassed and followed a teenager who survived the Parkland school shooting and called him a coward?” @eva_baker questioned. “Not to mention this is the same woman who has racked up over $60,000 in fines for refusing to wear a mask in Congress even though she’s unvaccinated.”

The follow up video has already been seen over 85,000 times and has likewise received praise from users on the popular app.