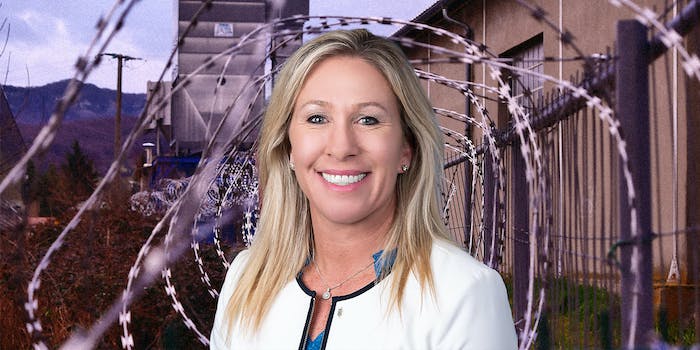 Last year, Greene argued that people who assault police officers should be imprisoned for life.

Rep. Marjorie Taylor Greene (R-Ga.) is on a mission to portray accused Capitol rioters as political prisoners. To that end, this week she visited the jail where some are being held.

She says that what she found was astonishing. In a Twitter thread, Greene likened the conditions to a “prisoner of war camp.”

“They are suffering greatly. Virtually no medical care, very poor food quality, and being put through re-education which most of them are rejecting,” Greene tweeted. She also recently told Steve Bannon that prisoners believe that staff are putting pubic hair in their food.

More than 100 police officers were injured in the Capitol riot on Jan. 6. Footage showed officers being beaten, crushed, and assaulted by the mob. One officer died after suffering a medical emergency during the riot.

Before the riot, Greene didn’t have nearly as much sympathy for people who attack law enforcement.

“If you kill a cop, DEATH PENALTY. If you target a cop, LIFE IN PRISON,” she tweeted last September.

On Twitter today, Greene also claimed that she’s crusading to end “this political war” and see that the justice system is never again used as a “political weapon.”

Then Greene pledged to something that some of her staunchest critics would likely support. “I am also beginning a plan for real prison reform,” she said.

While some were glad to see the QAnon following congresswoman use her voice for criminal justice reform, others felt Greene’s awakening was long overdue.

Human rights abuses are notorious at jails and prisons in the United States, where a disproportionate number of those incarcerated are Black and Latinx.

Some pointed out that Greene wasn’t interested until the majority-white accused Capitol rioters were jailed.

“We are getting reports the insurrection caucus never cared about prison reform till it was their people getting locked up,” said one.

Another common point was that it’s not exactly a secret that conditions are terrible in jail.

“Have you done a tour of Rikers?” tweeted another, referring to an infamous jail in New York. “I’m sure there’s lot of hopelessness and human suffering there too.”

Some also pointed out that those still being held are considered the most dangerous, in numerous cases for allegedly attacking police.

“Officer Brian Sicknick could not be reached for comment,” @JoJoFromJerz said, referring to the officer who died following the riot.