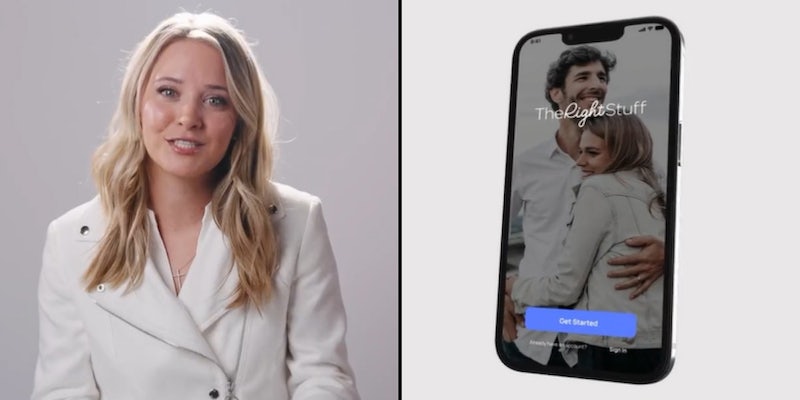 'Gentlemen, if you want access to premium, that's on you.'

Finding the right mate is a unique experience for everyone. Some people fall in love in the school cafeteria and live happily ever after. Others spend years or decades fruitlessly waiting for their meet-cute with that special someone.

A new app is looking to narrow down the dating pool to conservatives. The assumption is that it’s easier to find love with people who share your political beliefs. (Data suggests this is true.) The Right Stuff is reportedly backed by a $1.5 million investment from Peter Thiel, the conservative billionaire using his fortune to put his thumb on the scale of American politics.

Ryann McEnany, whose big sister Kayleigh was the White House press secretary during the Trump administration, stars in the debut ad the Right Stuff released on Wednesday.

“I’ve gotta tell you about something I am so excited to announce: A dating app for all of us conservatives,” the younger McEnany says.

The app is invite-only for “young” conservatives. The premium version is free for women—if they invite friends to join. “Gentlemen, if you want access to premium, that’s on you,” McEnany says.

“And by the way, those are the only two options: Ladies and gentlemen,” McEnany says, later adding “no pronouns necessary.” This apparently means that nonbinary people aren’t welcome. It’s not clear whether gay, lesbian, or transgender conservatives are allowed to use the Right Stuff, which uses the tagline, “For those who know traditional is attractive.”

“The Right Stuff is all about getting into the right dating pool with people who share the same values and beliefs as you….”

“We’re sorry that you’ve had to endure years of bad dates and wasted time with people that don’t see the world our way—the right way.”

The Right Stuff isn’t the first dating site to cater to conservatives. Before it there was Righter, Patrio, Dating Freedom Lovers (brought to you by InfoWars), and Awake Dating (for the lonely conspiracy theorist). Of these, only Awake Dating appears to still be in business.

People wasted no time making jokes about the Right Stuff. Multiple Twitter users suggested it could more aptly be named “the White Stuff.”

Cracks about QAnon conspiracy theorists, Nazis, and other mockery filled the comment section. Many suggested alternative names for the app, such as “the Reich Stuff,” “Qinder,” and “OkQpid.”

People had a great time suggesting various qualifications the Right Stuff may require of users.

“Do you have to pass the hymen test to prove that you have the ‘Right’ stuff?” wondered @All4ACT2. (Hymen tests are a flawed way of determining whether a vagina has been penetrated by sexual intercourse.)

“I’m also guessing y’all do a background check with the CDC to confirm that no one has been vaccinated for COVID-19. Correct?” quipped another.

Several suggested the caliber of potential mates might be somewhat lacking.

“So many dating services try to upsell you, but we’re all about incel,” tweeted @jswatz.

For others, the concept that men pay to access women proved a bit troubling.

“Ladies never have to pay, as long as we invite a couple friends. Isn’t that the line sex traffickers use to get teenagers to the yacht party?” @MrsOdie2 wondered.

The Right Stuff launches next month.